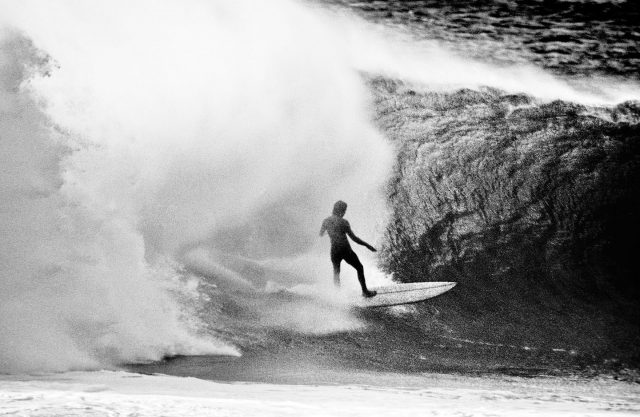 Greetings, Shredderz! Today we have for you a very cool example of perhaps the single most coveted surfboard of all time: a Lightning Bolt Gerry Lopez single fin, most likely shaped by the master himself.

First, a little bit of background: Lightning Bolt might have been the single biggest surfboard brand of the Seventies, but tracking down authentic Bolts can be a bit of a headache. For starters, Bolt’s logo was copied off endlessly, and it appeared on numerous surfboards that had absolutely nothing to do with the Hawaiian label.

Here’s a clean example of a Lightning Bolt Gerry Lopez single fin; to be honest, though, I’m not sure if it’s hand shaped by Lopez himself. I mostly posted it because I love the color combination. The board was for sale on UsedSurf.jp, which has a killer selection of vintage sticks.

But even when dealing with genuine Lightning Bolt surfboards, it’s not always clear which ones were shaped by Lopez. I wrote an earlier post on the subject of Lightning Bolt Gerry Lopez boards that featured some so-called “California Bolts”: genuine Lightning Bolts bearing signatures with Gerry’s name, but produced in California and shaped by Terry Martin and Mickey Munoz. (I also covered the topic in another blog post, which you can find here.)

So you can imagine my surprise when I saw an intriguing little Lightning Bolt board pop up for sale on Craigslist in Hawaii. The board is no longer listed for sale, but I saved the photos, which you can see here.

First, as you can see in the photos, the Lightning Bolt Gerry Lopez board is far from mint condition. But it does have a number of unusual touches, starting from the circle around the famous Bolt logo laminate.

It also has a pretty upright glass on fin, which you can see in the photos above. I also can’t help but notice the diamond tail. Most of the Lightning Bolt Seventies single fins I have seen have pintails, with the occasional swallow tail mixed in. I have seen a few examples of Lightning Bolt single fins with diamond tails, but they are much narrower than the Craigslist board pictured above.

The outline on the Lightning Bolt Gerry Lopez board featured here is reminiscent of the boards Lopez produced with Hansen during the Transition Era of the late Sixties. All of the factors above lead me to believe that the Craigslist Bolt was shaped in the early part of the Seventies. Close up of the diamond tail and the clear Gerry Lopez signature.

What really struck me about the board, though, was the presence of an obvious Gerry Lopez signature. As I mentioned in my previous post about the California Bolts, hand shaped Lightning Bolt Gerry Lopez boards are signed on the blank beneath the glass. Moreover, I have noticed that Lopez’s signature is often written in all caps, instead of the script you’ll see on California Bolts and newer repros. (Many thanks to Randy Rarick, who first passed on this tip.)

To no one’s surprise, Buggs Arico‘s Surfboard Line site has a few excellent examples of hand-signed Lightning Bolt Gerry Lopez boards. I have reproduced the signatures here, which originally appeared on Surfboardline.com. Please check out Buggs’ site if you haven’t already!

You’ll notice the red and yellow boards have very similar examples to the Craigslist Bolt. All of the signatures feature “LOPEZ” written on the stringer in all caps, in what looks to be beneath the glass. One small difference with the Craigslist board is the tilde over the O, which I have personally never seen before. In conclusion, I think the Lightning Bolt board posted to Craigslist was a rare example of a Bolt that was hand-shaped by Gerry himself.

The Craigslist Bolt was actually listed for a mere $700, which I think is an absolute steal. The listing stayed up for a few days but I have no idea who eventually made off with the board. If you’re the lucky owner, give me a shout!

Featured Photo at the top of the page by Jeff Divine; found on his awesome website.