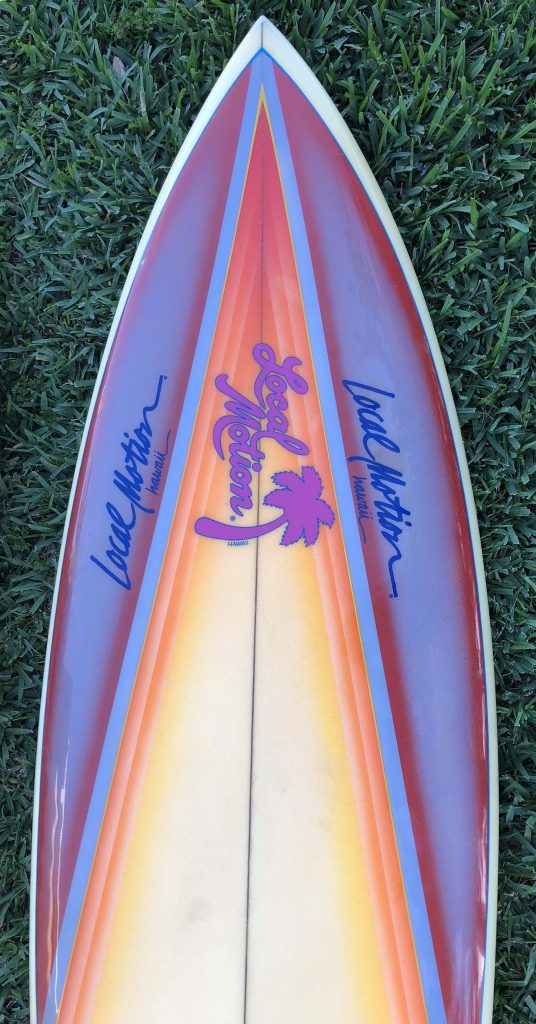 Greetings, Shredderz! Today we have another Shred Sledz Submission from Bobby — a fellow Gators fan — in Florida, who was kind enough to share these photos of a sweet Local Motion twin fin he picked up recently. Thank you Bobby for sharing pics of the board! Give Bobby a follow on Instagram for his troubles, and as always, hit me up if you have a board you would like to see featured here!

I would guess the board was shaped in either the late 70s or early 80s. You’ll notice the dual fin boxes, complete with some very sweet Rainbow Fins. Close up of the fins on the Local Motion twin fin. Not sure if these are considered standard fin boxes. They don’t look like examples of Star Fin boxes I have seen.

Since Stoked-n-Board is still down, I don’t have an easy way of looking up the list of shapers who made boards for Local Motion during the Seventies and Eighties. The only name I know off the top of my head is Pat Rawson, and this doesn’t appear to be a Rawson shape based off the signature. Close up of the signature on the Local Motion twin fin. Anyone have any guesses as to who this might be?

Regardless, this Local Motion twin fin is a super sweet board. First, the aesthetics of the board really stand out thanks to the colorful spray job and the multiple Local Motion laminates. It took me a bit to realize that there are actually two different types of Local Motion logos on the board. I’m partial to the palm tree version myself, especially in the loud pink color on the deck. I also love the outline of the board. The combination of the twin fin setup and the round tail strikes me as a little unusual (and very cool).