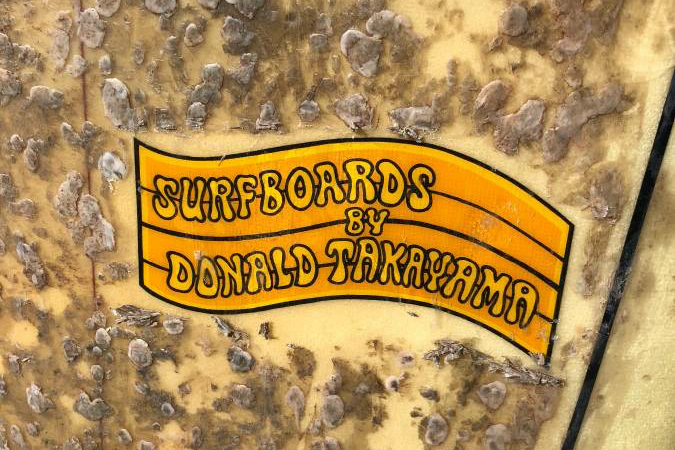 Greetings, Shredderz! The board featured here was a shoo-in for the Shred Sledz Signature Collection…until I read the price. Pictured below is a Transition Era Donald Takayama single fin that was listed on Craigslist for a firm $1K. As much as I wanted to dash off a borderline insulting lowball offer, the seller went as far as to require that any buyers include their minimum $1K bids in the email subject line. I can’t help but respect that kind of Craigslist power move. Anyway, enough about prices, and more about this rad Takayama surfboard.

I’m not sure what the measurements were on the board, but I would guess somewhere south of 8′. As you can see, it has an original Transition Era fin, which I believe is a Bahne Fins Unlimited model (not positive on that, so if you have more info, gimme a shout.) The seller claims the board was shaped in 1972, but if I can politely disagree, I’m wondering if it wasn’t shaped a few years earlier.

Case in point: there is a similar Transition Era Donald Takayama single fin featured on The Surfboard Project. I have included some of those pictures below.

As you can see, the Transition Era Donald Takayama from The Surfboard Project is extremely similar to the Craigslist board. Both have the same old school logo, era-appropriate fins, and distinctive Transition Era outlines. I would also say that both of these Takayamas look hull-ish to me, but I don’t have enough detail on the bottoms of the boards to say for sure. One difference is the Craigslist Takayama single fin has a pintail, whereas the board from The Surfboard Project has a pretty wide squash tail in its place.

And to tie things back to the date, Joel Tudor has chimed in on the board featured on The Surfboard Project. Tudor, of course, is Takayama’s most famous protege. Tudor estimated that the Transition Era Donald Takayama board on the Surfboard Project was likely shaped in 1969 or 1970. Given the similarities between the two boards, I would guess the same dates for the Takayama single fin posted on Craigslist, instead of the 1972 date supplied by the seller. Joel Tudor also posted an old Donald Takayama ad on Instagram a while back that dates to 1969, which I have inserted below:

Finally, a quick word on the price: for a genuine Transition Era Donald Takayama board, I think $1,000 is in the ballpark. Is it possible to find one at a cheaper price? Maybe. But the problem with unique boards like the one featured here is that they don’t pop up frequently. This also means there can be huge swings in prices from one board to the next. Donald Takayama, who sadly passed away in 2012, is a shaper with a Hall of Fame resume, and I wouldn’t be surprised to see his boards increase in value over the years. The Craigslist posting was taken down in a few days, and I can only assume someone was willing to cough up the $1K+ for the board. If you’re the new owner of the board, feel free to reach out, as I would love to learn more. Otherwise, I hope you enjoyed this look at a rare and well-preserved example from the early days of Donald Takayama’s long and storied career.