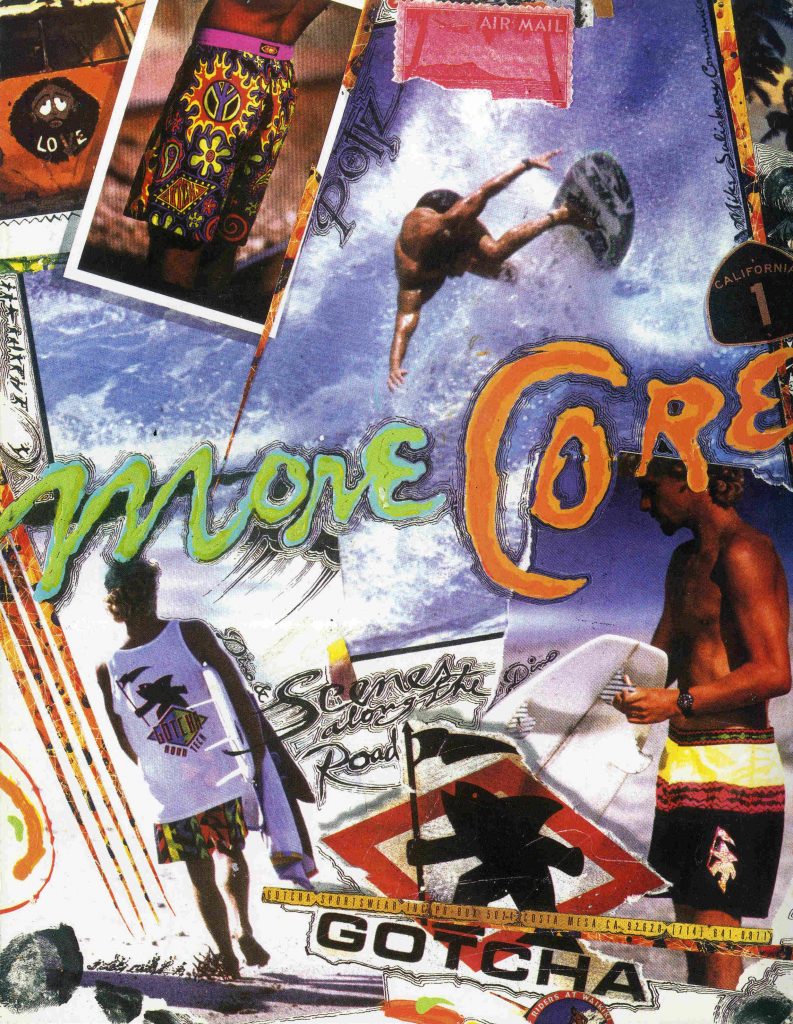 Greetings, Shredderz! Welcome to the latest installment of Sagas of Shred. Today we’ll be exploring a vintage Gotcha ad from 1990. Gotcha was founded in 1978 by South African surfer Michael Tomson, cousin to Shaun. (I recently wrote up a sick Stussy board that once belonged to Michael Tomson, which you can see here.) The brand saw its greatest success during the 1980s and the early 1990s, when its loud aesthetic helped set the tone for surf culture as a whole.

Successful surfwear brands are often defined by their team riders, whether it was the combination of Kelly Slater and Quiksilver in the 1990s, OP and Tom Curren in the 1980s. Even today, when the big corporate surf brands have seen their grip on culture begin to slip, Mick Fanning and Rip Curl are still synonymous with one another. Gotcha was no exception to this rule, having been home to pros like Brock Little (RIP), Derek Ho, Rob Machado and Matt Archbold.

Gotcha’s most iconic team rider, though, has to be Martin Potter. The vintage Gotcha ad featured in this post originally ran in a 1990 issue of Surfer Magazine, and as you can see, it prominently features Pottz. Eagle-eyed readers will notice Pottz is going off the top on a Blue Hawaii Pottz Model board. The other pro surfer featured in the ad is none other than Dino Andino, Southern California fixture and father to current WSL competitor Kolohe.

I tend to feature ads that I find amusing — like this earlier Gotcha / Pottz spot — but in the case of the example above, I think it’s a compelling piece of graphic design. The vintage Gotcha ad actually reminds me of Volcom ads from the late 1990s. Beyond the shared homemade collage aesthetic, the Gotcha ad channels the raw energy and creativity that made Volcom so irresistible during its peak.

It’s also interesting that this Gotcha ad reads “More Core.” At some point during the late 1980s, Gotcha spun off More Core Division into a separate sub-brand, which was Andy Irons’ sponsor for many years before Billabong stepped in. I’m guessing this ad just barely pre-dates MCD’s existence as a separate line. It’s a shame that Gotcha is no longer around, although Urban Outfitters recently released a small collection in conjunction with the storied label. Even sadder, Michael Tomson was arrested a few years ago on suspicion of cocaine trafficking in Southern California. For a sunnier look at things, the Surfer’s Journal ran this excellent interview with Tomson covering some of the better stories from Gotcha’s run. Even if things didn’t end on a particularly high note, there’s no denying Gotcha’s place in history as a formative surf brand.

Thanks for checking out Sagas of Shred and come back in a week for even more!