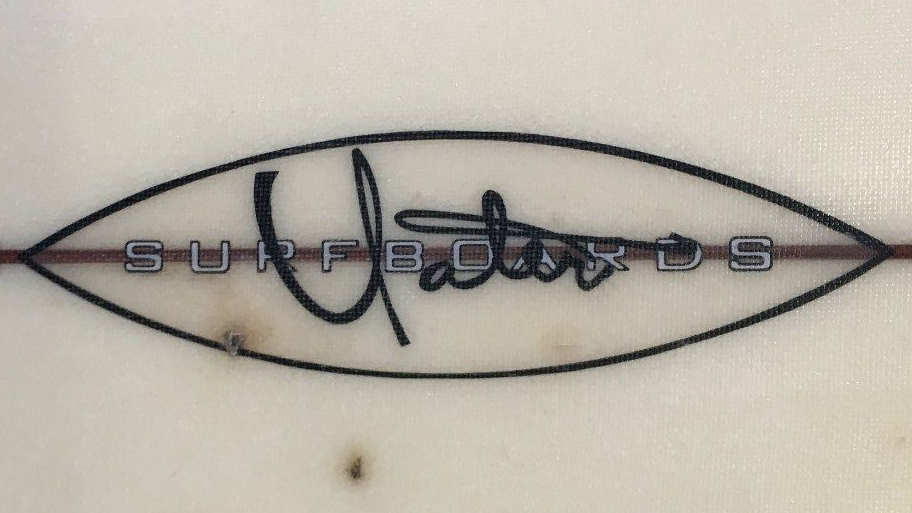 Greetings, Shredderz! Today’s post features a bit of a head-scratcher: a Reynolds Yater Seventies single fin that ended up selling for a bargain price on eBay. I’m still a bit shocked that the board didn’t command more on the open market, especially considering it was an auction.

The photos in this post were taken from the eBay auction, which you can find here. It’s unclear what year the board was shaped, but it was almost certainly sometime during the Seventies. The measurements are 7’4″ x 21″ x 3″, and as you can see from the pictures, it’s in great shape.

Close up of the logo and signature on the Yater Seventies Single Fin. If you look closely towards the top of the screen you’ll see the textured deck. You can just make out the “Y” right above the serial number (#2152).

The picture above demonstrates two cool aspects of the Yater board in question: first, you can make out the textured deck (look at the top of the picture); and second, Yater’s “Y” signature along with a serial number.

Nowadays Yater signs his boards on the stringer closer towards the tail, as you can see here. The Yater Seventies single fin, however, has a single “Y” signature on the deck located closer towards the nose, and right beneath the logo. I’m not sure when Renny shifted to signing “R. Yater” in script towards the tail, but the single “Y” is commonplace among a lot of his boards made during the Seventies. For example, I wrote up one of Renny’s personal riders that was sold during the 2017 California Gold Surf Auction.

The Yater Seventies single fin on eBay sold for a much lower price than I would have guessed, closing out at a paltry $320. If you had told me the board had sold for double or even triple that amount I wouldn’t have blinked an eyelash.

There are two recent comparisons I have, although both of these are Renny’s personal boards, and they were also sold at auction. First, there’s the 2017 California Gold Yater personal rider, which cleared a cool $3,700. At the 2018 California Gold auction another Yater personal rider — a Nineties thruster — sold for $2,000. I would say off-hand that Yater Seventies single fins are among the most collectible of all his shapes. As a result, I’m blown away that a super clean example sold for $320 on eBay, of all places, as opposed to being some random one-off Craigslist bargain. There was no shipping on the board, but I don’t think that’s the only reason this thing sold for at least a few hundred below what I was expecting. Then again, pricing vintage surfboards is equal parts art and science.