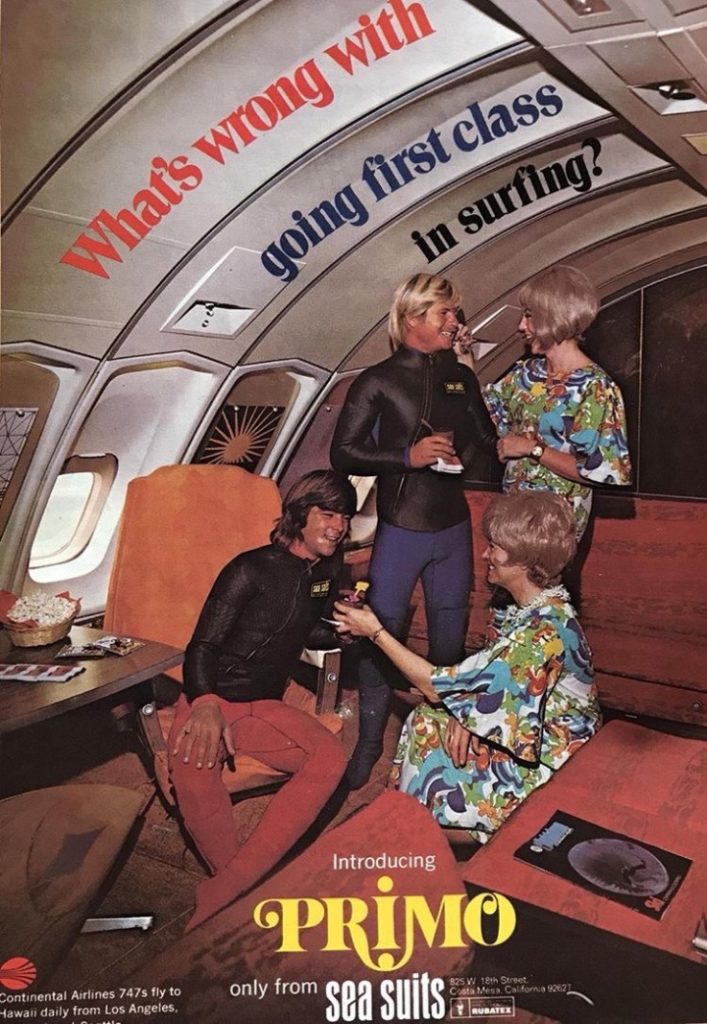 In theory, I love all of my blog posts equally. In practice, that couldn’t be further from the truth. (I’m still partial to my first-ever Deep Dive, which features a history of Wayne Lynch’s early shapes.) And while I have been writing Sagas of Shred for a while now, this one just might be my favorite.

First, before I get started, much credit to Ted Campbell, who originally posted a snapshot of the photo on Instagram. When I asked for more background on the photo, he generously shared the full picture with me. Thanks again Ted!

But more to the point, the photo above is an advertisement from Primo, which seems like an old wetsuit brand. I wasn’t able to find much about it online, though I was able to find another great old school Primo ad. The Primo advertisement features two of the best known surfers to come out of the South Bay area of Los Angeles: Dru Harrison, on the left, and the inimitable Mike Purpus, standing to the right.

Dru Harrison had a signature model for Rick Surfboards. And while Harrison was an incredible surfer, I can’t get enough of Purpus. He just looks like he’s having the time of his life — which is appropriate when you consider the setting for the photo shoot. Purpus was an early Jacobs team rider, and then he went on to produce boards under the Hot Lips Designs label. Hot Lips is still one of the greatest name and logo combinations in the history of consumer brands, much less surfing (only slightly joking there.)

Are you also a certified Airbrush Aficionado? If so, you’ve come to the right place, because here at Shred Sledz, there are few things we appreciate more than a fine spray job. This is a #mikepurpus Hot Lips single fin I saw posted online somewhere a little while back. Hot Lips is on the short list for the greatest surfboard label name and logo combination, but that’s a subject for a different post. #airbrushaficionado #vintagesurfboard #shredsledz

What we’ve got here, Shredderz, is a very cool artifact from California’s surfing scene in the 1970s. The board is a #mikepurpus Hot Lips Designs interpretation of the @aipasurf sting. This bad boy was also shaped by Lance Collins, of @wavetoolssurfboards fame. Hit the link in the bio ☝?☝?☝? for my write up of the board and some other cool #lancecollins stings! Board is not mine and picture is from a Craigslist posting. ??? #hotlipssurfboards #hotlipsdesigns #stingsurfboard #stingersurfboard

What can I say? I’m just a sucker for any of Purpus’ ridiculous antics, whether it’s posting in a hilarious Seventies aircraft or his infamous Raquel Welch airbrush:

A shot of Mike Purpus on the North Shore, Hawaii in 1975. Photo @merkelmedia I was in the USA on a Quiksilver tour recently & the boys stopped for a surf at El Porto, Manhattan Beach in the South Bay. I knew Mike was from Hermosa Beach just down the road & I wondered if he was around. We had only been there for about 15 minutes & Mike appeared !! It was cool to see him, I don't think I'd seen him since those early years in Hawaii. Mike was one of California's first Pro Surfers & he was invited to the prestigious Duke Kahanamoku event in Hawaii five times. It was usually run at Sunset Beach with Waimea Bay as the back up location. I thought I rode boards with a lot of color, but I think Mike's quiver was even more colourful. @southbayboardriders @benny_big #mikepurpus @cidoubleyou @taywhis @mikereilly1 @bmcknight @rcastroo2 @katin_surfshop @quiksilver @quiksilver_originals @chrisdarrah

Once again, thank you to Ted for sending me the ad in this post. Give him a follow on Instagram — he posts some great content. I hope you enjoyed this installment of Sagas of Shred, and as always, come visit late next Thursday, California time, for even more awesome vintage surf ads.