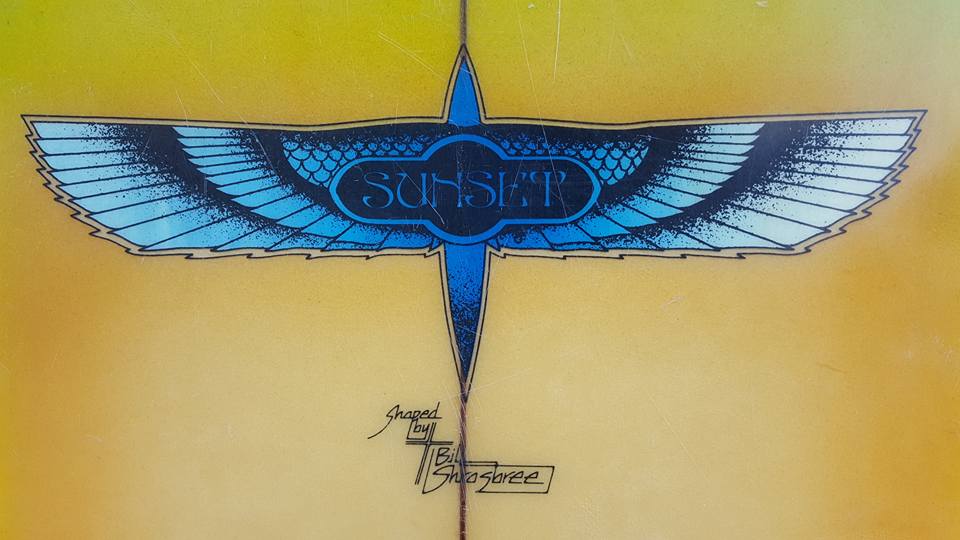 Greetings, Shredderz! First of all, apologies for the continued technical difficulties with the site. If you are noticing some older posts are gone and/or there are issues loading the photos, please bear with me. I am working to resolve these issues ASAP. In the meantime, check out these wonderful photos that were sent to me by reader Steve Wray, who has supplied photos for some other rad posts, including this amazing Jacobs single fin with a Jack Meyer airbrush. (I’m always accepting submissions, too, either via Instagram or email.) The boards featured here are two Sunset Surfboards single fins shaped during the Seventies. At least one of these boards was shaped by San Diego craftsman Bill Shrosbree, although the other doesn’t have any signature on it.

I really dig both boards, although I have a soft spot for Stings, as longtime readers may have noticed. I also love the variety in the logos. And if I’m not mistaken, the board on the left has two tiny little wings right above the tail, in pretty stark contrast to the one on the right.

Steve was also kind enough to share close up shots of the fins on both boards. I can’t tell if the yellow fin is all original, but as you can see below, the blue fin on the Sunset Surfboards sting definitely looks like it was made during the Seventies. Another nice little touch is the screw with the eyelet, which was common for attaching leashes to boards before leash plugs became more common.

I love all shapes and varieties of surfboards, but I have a soft spot for Seventies single fins. These Sunset Surfboards beauties are classic examples of some of the boards that were made during this groovy ass decade. Shout out to Steve for sharing these photos!