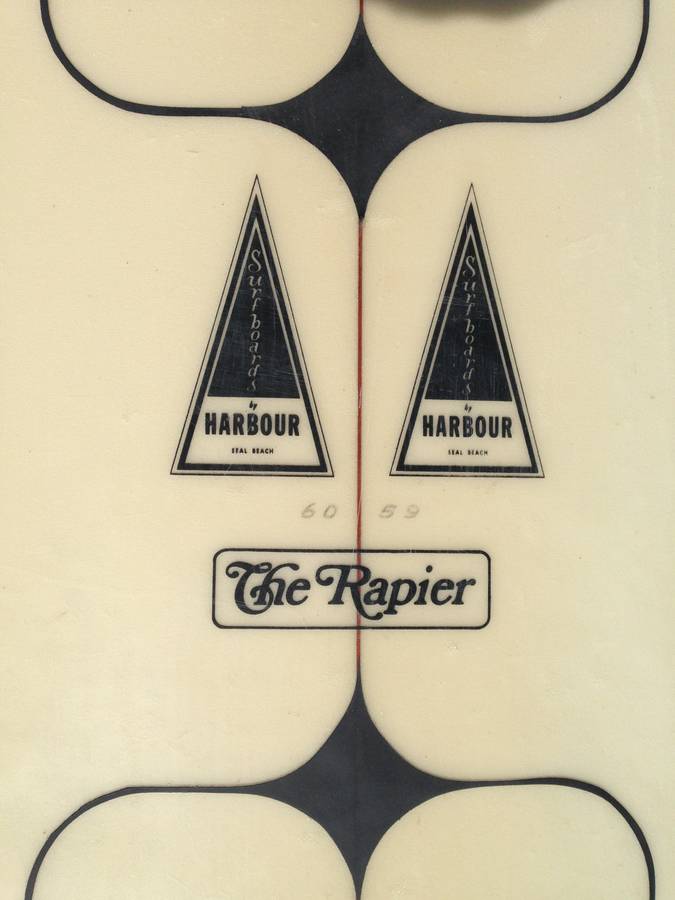 Greetings, Shredderz! Today we have a quick glimpse at an interesting Transition Era board from a classic California surfboard label: that’s right, a vintage Harbour Rapier V Bottom that was likely shaped during the late Sixties. Love the detailed black pinlines on the deck

While the Transition Era took place only over a few short years, a whole lot of experimentation was condensed into this time in history. I am a huge fan of v bottom boards in general, although this has more to do with their history and how they look than anything else. I have heard mixed things about how v bottoms surf. It’s also worth noting that some well-regarded modern shapers have incorporated the v bottom into modern high performance designs, such as Marc Andreini, Gene Cooper, and Bruce Fowler. A look at the bottom of the board. Looks like there’s very low rocker throughout, but it’s hard to tell from this angle.

The vintage Harbour Rapier V Bottom featured in this post is currently for sale on Craigslist in Central California. You can find a link to the listing here. First, this is the only Harbour Rapier I have seen that boasts a v bottom. Harbour Surfboards continues to produce the Rapier today. Most versions of the Harbour Rapier I have seen, whether modern or vintage, have the board as a pintail longboard. By contrast, the V Bottom in the post is only 8’6″ in length, a good deal shorter than the longboards produced during the Sixties. See below for pics of a vintage Harbour Rapier, along with the classic “Sea Nymph” logo.

Beyond the rarity of the Harbour Rapier V Bottom featured here, I love a lot of the small details on the board. The creamsicle color scheme is absolutely killer, for starters. I also love the bold black resin lines on the deck, which were fashionable during the Transition Era. The double Harbour triangle logos are a sweet and unusual touch, too. As you can see below, the board also comes complete with a rare W.A.V.E. Set fin. Close up of the W.A.V.E. Set fin. You can also make out the vee in the tail.

As of the time this post was being written, the listing for the board is still up, but the board has apparently been sold. The price on the listing was $7,000, but I’m wondering if that was a typo. Even given the unusual nature of the board and its condition, I would have a hard time believing that the Harbour Rapier V Bottom sold for anywhere near that price.

Thanks for reading and you can check out the Craigslist listing here.