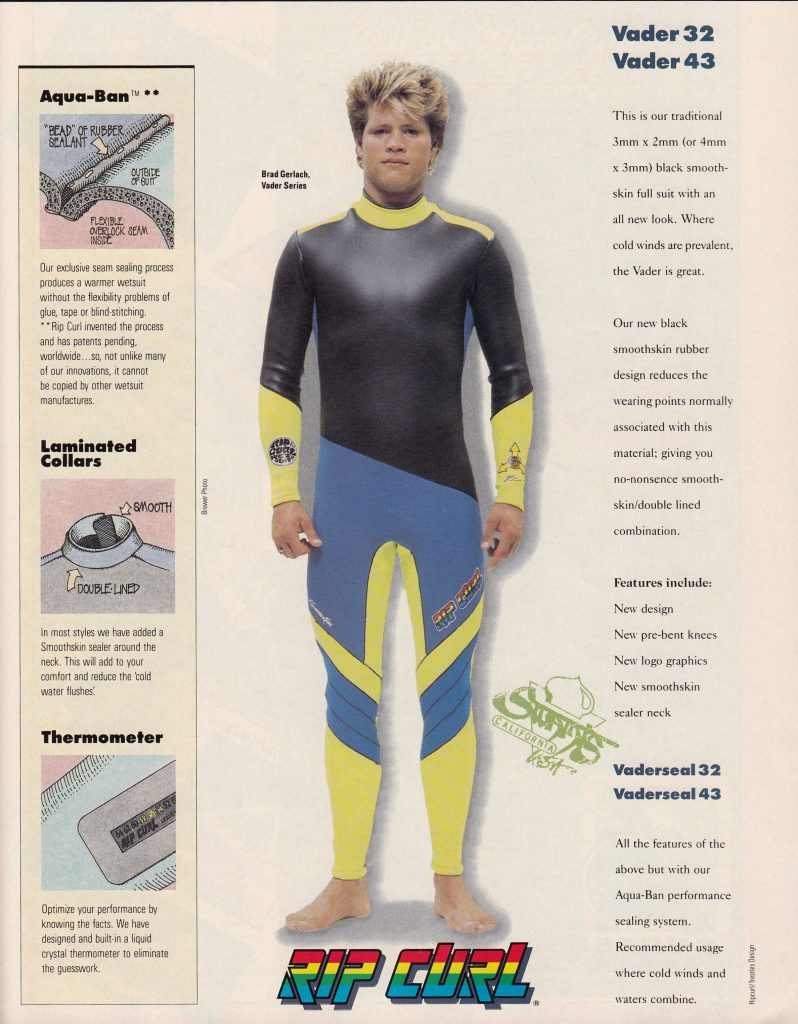 Greetings, Shredderz! Some exciting developments are afoot here at the world’s lowest budget vintage surfboard blog: I finally ponied up for a scanner, which means fresh material for Sagas of Shred, the weekly series featuring a vintage surf ad every Thursday evening. First up is technically only half of a Rip Curl ad from the January 1988 issue of Surfer Mag (Vol. 29, No. 1), featuring Brad Gerlach and co-starring his truly flawless head of lettuce. Between the volume, the sun bleach, and the styling, it’s a real murderer’s row.

Sagas of Shred often ends up as the expression of my fascination with Eighties surf culture, which lies somewhere between nostalgia tinged affection and outright amusement at the things that haven’t aged as well. But this Rip Curl suit still looks dope today, a good thirty plus years after the ad originally ran. That color scheme is awesome, and I love all the details in the suit, whether it’s the uneven line of the top, or the futuristic knee pads. Vader is a pretty badass name for a wetsuit line, copyright infringement and all. The rainbow hued Rip Curl logo clearly hails from earlier times, but I would argue it has aged handsomely. It’s also worth noting that Gerr seems to be drinking from the fountain of youth himself, given that he’s in his early fifties and still absolutely rips.

The funny part is the second half of this Rip Curl ad actually features Tom Curren doing a nice off the top on a vintage Channel Islands Al Merrick board. I’ll scan it at some point and probably share it on Instagram, but what can I say? I actually found Gerr and the wetsuit more interesting, somehow.

Thanks for checking out the latest installment of Sagas of Shred, and don’t forget to pop back in next week for even more vintage surf advertisements and other assorted goodness.