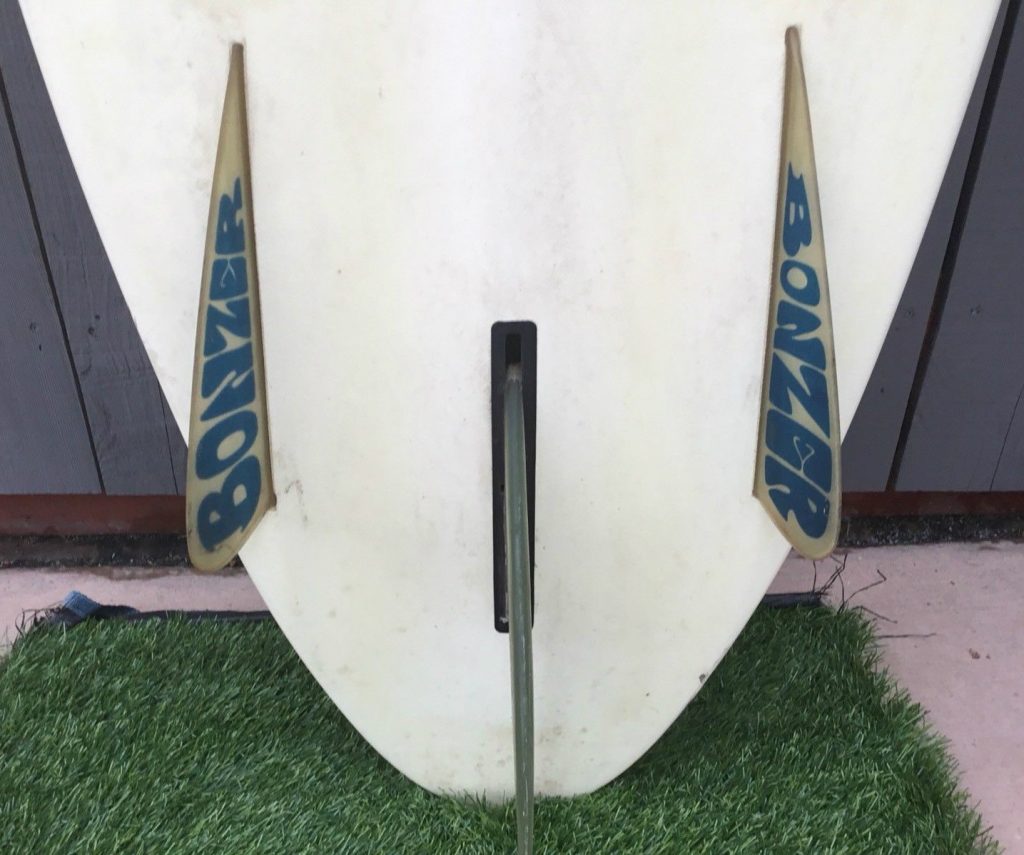 Greetings, Shredderz! Today we are featuring a beautiful little vintage Bing Bonzer that sold on eBay for $800. You can find a link to eBay listing here; all photos in this post are via the listing.

My take is this is a good price for a very cool board. By contrast, I wrote up another Bing Bonzer, albeit one in much better condition, that sold on eBay for $1,100. The Bing Bonzer looks to be pretty good condition, especially considering its age.

When I first saw the vintage Bing Bonzer pictured below, it almost looked like a stubby-esque outline. However, I was surprised to see the dimensions: 8′ x 21 3/4″ x 2 1/4″. I really love the prominent beak in the nose. This board looks like it has tons of paddling power. The subtle pinlines on the deck and the cream and blue colorway are both beautiful touches, too.

I can’t help but compare this Bing Bonzer to other examples I have seen. The first thing that stands out to me is the Bonzer logo that appears on the side bites. See below for a close up from the board that just sold on eBay: Now, see below for three other Bing Bonzers I have written up previously. You’ll notice the Bonzer logo is different on the three boards below. The text is in all caps and it’s not quite as “round” as the font on the white eBay vintage Bing Bonzer, for lack of a better word.

In addition, the entire tail end of the eBay Bing Bonzer looks different from other examples I have seen. The white eBay board has a much more mellow double concave in the tail compared to the extreme scooped-out design of the three Bing Bonzers above. In addition, the eBay board has a round tail. One other random note: I have seen a different version of the Bing logo that includes the word “Bonzer” in it, which is different from the standard Bing logo on the deck of the eBay board.

It seems clear to me that the eBay board is a different model than the trio of Bing Bonzers pictured above. However, I’m not sure which came earlier — the Bonzers with the super deep tail concaves and the all caps logo on the side bite fins, or the eBay board. It’s also possible they were produced at the same time, but I think that’s less likely. A knowledgeable friend thinks the eBay board might be a later version of the Bing Bonzer, but I can’t confirm any of this. According to the Campbell Brothers’ website, the Bing Bonzer was only produced between 1973 and 1975 at the latest.

If you have any clues about the dates different vintage Bing Bonzer boards were produced, please let me know! Finally, you can find a link to the board featured in this post here.