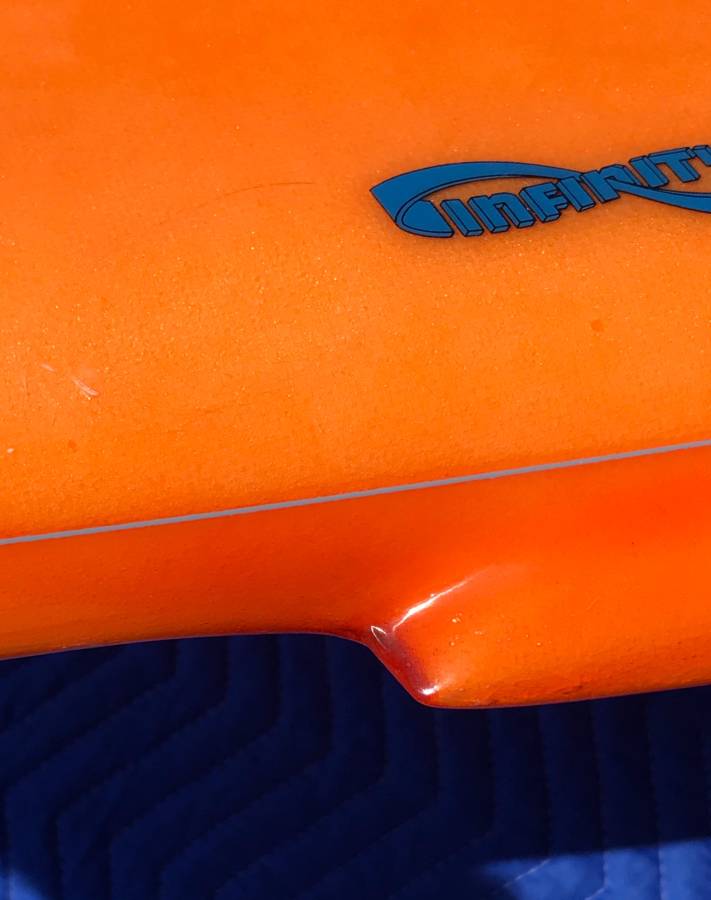 Greetings, Shredderz! Today’s post is short and sweet: I just want to notify you all of the super clean and interesting vintage Infinity Surfboards single fin that’s currently for sale on Craigslist. You can find the board in question here. All of the photos in this post are via the Craigslist link.

First, I am a little puzzled as to how to describe the outline. The first thing that comes to mind is the classic Aipa sting, due to the prominent wings in the tail. The wings on the vintage Infinity Surfboards single fin are more severe than what you would expect to see on a wing tail single fin, for example. But there are a number of reasons why I would stop short of describing the vintage Infinity Surfboards single fin as a straight up sting. First, with regard to the wing placement, I think the wings are pushed just slightly further towards the tail than you would expect from a standard sting outline. Then again, it’s hard to tell without being able to see the board in person. The other odd element is the pronounced diamond tail, which you don’t really see in many Seventies stings. The vast majority of stings I have seen are swallowtail designs, with a few round pins here and there.

It’s worth noting that shaper Terry Senate is a link between Ben Aipa and Infinity Surfboards. (Check out this sweet Aipa twin fin shaped by Senate I wrote up a little while ago.) Senate shaped for both Aipa and Infinity, so there are least some definitive links between Infinity and the inventor of the sting.

The other thing that really has me scratching my head is the board appears to be stringerless. Again, it’s difficult to say — this might just be a result of the glassing job. But if you look at the close up of the tail and then the photos on the Craigslist post, I can’t see any evidence of a stringer lurking beneath the glass.

And with Stoked-n-Board still out of commission from SHACC’s website, I don’t have any clear ideas on who might have shaped the board. If you click on the close up of the tail above and to the right, you’ll see “DC2” (or is it “RC2”) inscribed on the board. I don’t know who this is.

The board isn’t in perfect condition, but dang, it is beautiful. The colors really pop, and I think the vintage Infinity Surfboards single fin is all original. Truth be told, I prefer the vintage look to fully restored boards, which can sometimes take on an artificial brightness. As a sucker for careful resin work, I really love the pale blue pinline around the rails. And when it comes to the all-important topic of logo placement, I can’t get enough of the twin Infinity logos positioned right near the wings on the tail.

The seller seems firm on his price of $300. Yes, there are some dings and imperfections, but I think this is a more than reasonable stance given everything else that’s going on with the board. Check it out here and if you end up snapping up this vintage Infinity Surfboards single fin, definitely give me a shout!