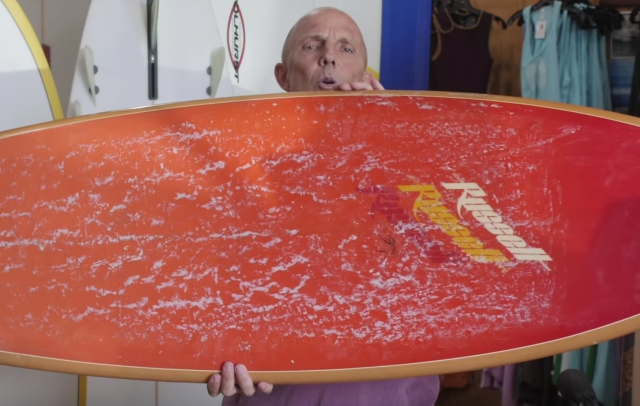 Greetings, Shredderz! Today’s post features Bird Huffman, owner of the legendary’s Bird’s Surf Shed down in San Diego. If you haven’t paid pilgrimage to the Shed yet, you should. The Shed is stocked full of an incredible array of vintage boards and staff members are personable and knowledgeable.

Bird has also been hosting a great series for Surfer Magazine titled “Shed Sessions.” Each Session takes a crew of surfers from a certain area and then hooks them up with some vintage boards, all of which have a historical connection to the featured location, and films the results. The most recent Shed Session features some Newport Beach rippers taking a couple of Orange County gems through their paces.

There’s a beautiful Dyno sting — shout out to Bird for the proper nomenclature — that looks really fun in the small but hollow beachbreak testing grounds. The next board is a Robert August swallowtail single fin, which looks very similar to a board I wrote about recently.

The star of the show, though, is a Shawn Stussy-shaped Russell Surfboards single fin. As longtime readers may know, I love Stussy’s boards in general. It’s hard to argue with a classic Eighties Stussy thruster, but I may love the Russell single fins from the Seventies just as much. For one, they aren’t as common. Close up of the logo of the Russell / Stussy board featured in the Shed Sessions video. Like Bird, I have never seen this combo before.

I love this Russell Surfboards Stussy shape because you can see the beginnings of what would go on to become one of the most famous streetwear brands ever. In the photo above, which is a screengrab from the video, you can see an early version of the Stussy logo. As Bird mentions in the video, I have never seen another Russell board with a Stussy logo. I have seen other Russell boards that were signed by Stussy, and I have also seen Stussy boards with early versions of the logo that pre-date the famous script, but the combo above is unusual.

File this one under “ones that got away”! Here at Shred Sledz we celebrate Shawn Stussy’s entire catalog, and the boards he made earlier in his career for Russell Surfboards are particularly interesting. Hit the link in the bio ?????? for the full post. I love the graphics on Stussy’s 80s boards but I can’t get enough of the clean 70s single fins he made with The Brotherhood before striking out on his own. This bad boy popped up on Craigslist a few weeks back and some other collector must have pounced. I just hope it found a happy home! #shawnstussy #stussysurfboard #russellsurfboards #vintagesurfboard #singlefin #shredsledz

Surfer Magazine has produced a bunch of Shed Sessions episodes, and I urge you to check out the entire run. It’s a great series featuring some beautiful old boards paired with great surfing and even some history, too.