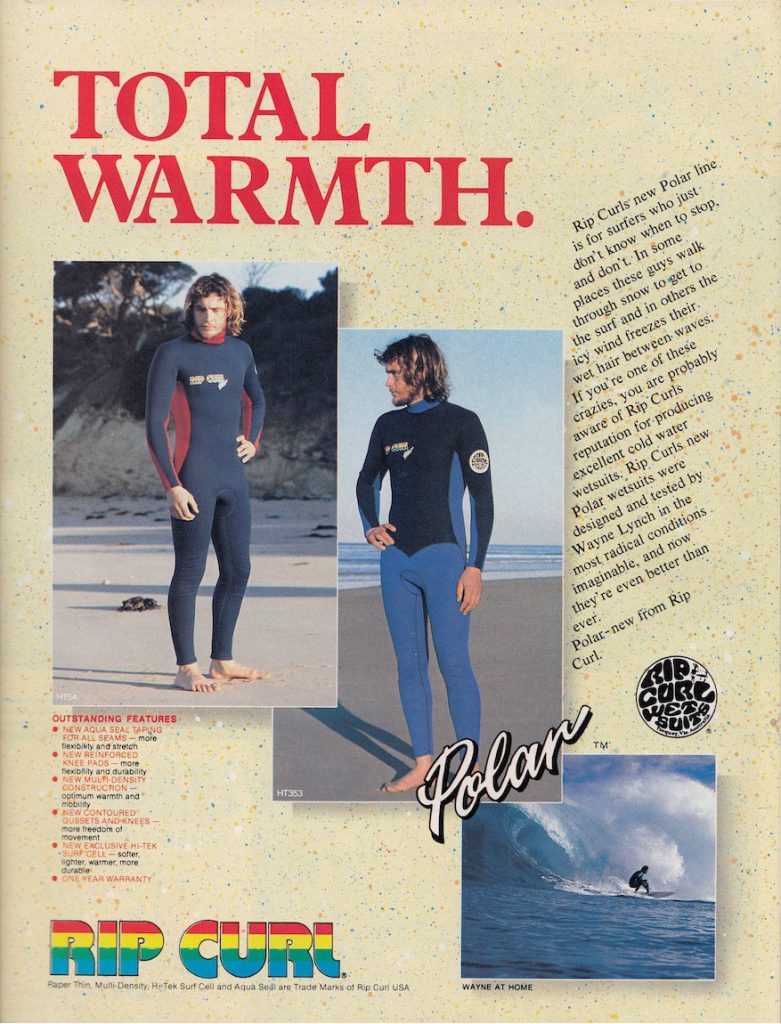 Greetings, Shredderz! Look, I know we’re all thinking it, so I’ll just come out and say it: I think I may have been a little tough on Rip Curl in last week’s Sagas of Shred entry. Did the Aussie surf brand misspell the name of a certified surf legend? Yeah, there’s no way around that one. And did Rip Curl also take perhaps the most stylish regular foot of all time and try and pass him off as a goofy? Sadly, that one is also pretty cut and dried. But enough about Rip Curl’s missteps. Let’s focus on the positive, shall we? For all the fine folks that have surfed under Rip Curl’s banner, even the biggest Mick Fanning fan would agree that there was something special about Wayne Lynch’s stint as a team rider. And I can’t think of a better way to celebrate this union than by running this scan of a Wayne Lynch Rip Curl ad from 1983. Wayne Lynch overlooking a remote Victoria spot. Check out that racy little Rip Curl branded single fin he’s got under his arm. It looks like a sting, and the fin placement is similar to what you would see from Buttons’ old boards. Photo by Art Brewer and via the peerless Encyclopedia of Surfing.

First, both Wayne Lynch and Rip Curl are native to Victoria, Australia. While best known as the home of Bells Beach, Victoria also has a reputation as a cold water paradise with a variety of mysto spots tucked away along its coastline. Likewise, for all of Wayne Lynch’s competitive success during pro surfing’s earliest days, his reputation is who preferred surfing in solitude in his home state over surfing’s rat race.

The Encyclopedia of Surfing points out that for all of Lynch’s suspicions about surfing’s commercialization, it was the surf media and surfwear companies — namely, Rip Curl — that made him famous, and presumably helped finance his solo excursions up and down the Victoria coast. But when I see the Wayne Lynch Rip Curl ad above, I can’t help but think Rip Curl found the perfect embodiment of their brand.

Maybe there’s something cynical — even hypocritical, if you want to be harsh — about monetizing the image of a so-called soul surfer. But I have no such objections. I figure if you’re in the wetsuit business, what better way to move product than by enlisting the man who personifies a unique brand of cold water wanderlust? (Side note: I can’t help but think that O’Neill is blowing it by not doing something similar with Timmy Reyes.) I love the Wayne Lynch Rip Curl ad featured here because it says something about Lynch and his surfing, and it speaks to the sense of adventure that has so much to do with surfing’s appeal.

As always, thanks for checking out this installment of Sagas of Shred, and check back in next Thursday night for more. And if you’ve made it this far, please do check out this post I wrote on Wayne Lynch’s early surfboards, which remains one of my all-time favorite posts I have written on this humble little blog.