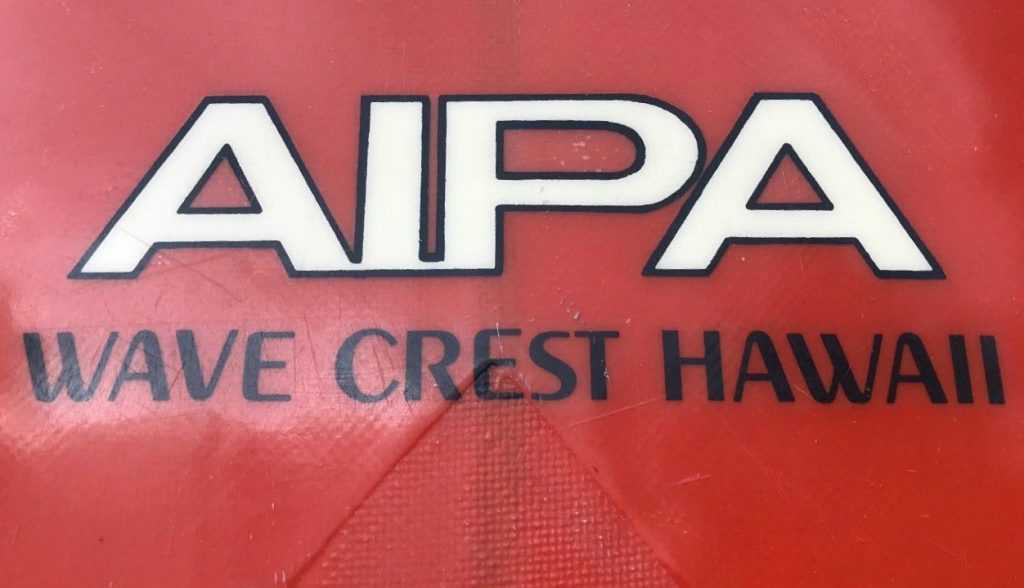 Greetings, Shredderz! Today we’ll be featuring a board that is equal parts unusual and cool. Pictured here is an Aipa Wave Crest Hawaii sting with some positively supersized dimensions. The board clocks in at a whopping 9’4″, which is a good two plus feet longer than what you might expect from a classic Aipa sting. You can find a link to the eBay listing for the sting gun here. Every time I look at this board I find myself doing another double take at its outline. Look at how high up those wings are from the tail! If the board is 9’4″, per the listing, you have to figure the wings are good four feet, minimum, from the back of the board. I’ve never seen another sting with dimensions close to this one. Maybe I need to get out more, but all the other examples I have seen are in the six foot plus range, to maybe hovering just under eight foot.

I can only imagine that this Aipa Wave Crest Hawaii sting must have been designed for some serious Hawaiian surf. Sadly, I’m much better at writing about surfboards than I am at riding them, so I’ll defer to someone else on how the stretched out dimensions of this outline might have affected the performance of the board.

The sting also has beveled rails on the bottom. The red board pictured above on the left is the same board featured in this post; the yellow board to its right is a different Aipa Wave Crest Hawaii sting that I own. Apparently the beveled rails, often paired with a step bottom, were a fairly common feature for later editions of the famous Aipa sting.

I think there is a good chance the red Aipa Wave Crest Hawaii sting was not shaped by Ben Aipa himself. (I’ve also written up the Aipa Surfing’s New Image boards, apparently none of which were shaped by Aipa.) Randy Rarick told me over email that Ben Aipa consistently signed his name and a number on the decks of his boards. In addition, Aipa also used some ghost shapers to produce some boards under his namesake label. The Aipa Wave Crest Hawaii sting doesn’t appear to have an Aipa signature or a number anywhere on its deck. That said, it is still an absolutely awesome surfboard.

The sting in question has seen better days, and shout out to the seller for carefully documenting the board’s condition throughout all of the photos. If you click through to the eBay link you’ll see, for example, that there’s a wide open spot on the tail that would require a decent amount of work.

That said, this Aipa Wave Crest Hawaii sting’s fixer upper status doesn’t seem to have hurt the price. There’s already a bid on the board for $650, which doesn’t even include the cost of any repairs or shipping. I think that speaks to the collectibility of any sting bearing Aipa’s name, regardless of whether or not Ben shaped it himself. And for good reason, too — Aipa’s sting is one of coolest designs ever, if you ask me, and there aren’t a whole lot of them floating around.

Check the board out here on eBay if you’d like to see more.