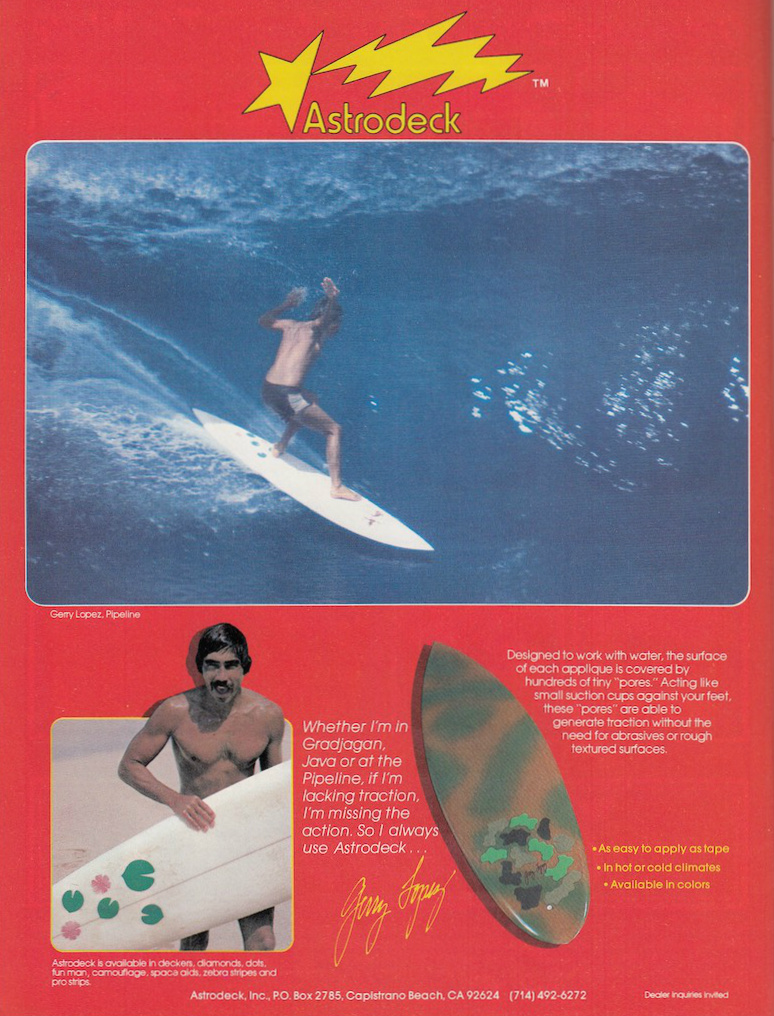 Greetings, Shredderz! Today’s entry in Sagas of Shred — the series in which we feature a different vintage surf advertisement every Thursday night, California time — is an unexpected pairing in the form of a Gerry Lopez Astrodeck ad. Even though Astrodeck inventor Herbie Fletcher originally hails from California, he has a long relationship with Hawaii, including some amazing Jet Ski adventures in pumping surf. I’m not surprised that Lopez and Fletcher crossed paths on the North Shore during the Seventies and Eighties. (In fact, I even wrote up another Eighties Astrodeck ad where Gerry can be seen lurking in the background.) That said, Gerry Lopez and Herbie Fletcher strike me as an unusual pairing. Fletcher has always possessed a brash presence and the savvy of a sharp eyed businessman. Lopez, on the other hand, is known for being calm and low key, and by all accounts he has avoided the spotlight in recent years to dedicate more time to snowboarding.

This Gerry Lopez Astrodeck ad ran in the September 1982 issue of Surfer Magazine (Vol 23, No 9). I’m not sure when Fletcher invented Astrodeck, though I believe it was sometime during the late Seventies. There are a few clues that tell me the Gerry Lopez Astrodeck ad featured above happened earlier on in the company’s history. First, the logo is an earlier design (see here for the current version, which I believe has been around since sometime in the Eighties.) Second, if you look at the traction itself, it’s clearly an earlier design that predates the iconic traction pad we all know and love. By contrast, here’s another Eighties Astrodeck ad I wrote up before, and you can see the updated logo as well as the transition to tail pads.

I love this Gerry Lopez Astrodeck ad, if for no other reason there aren’t too many examples of Lopez doing ads for non-Lightning Bolt surf brands! The same issue of Surfer Magazine also has a feature on Lopez’s experience on the set of “Conan the Barbarian”. Between this Astrodeck ad and a brief Hollywood phase, I’m guessing Lopez reached his fill of the limelight.

Thanks for reading and check back in next week for more Sagas of Shred!