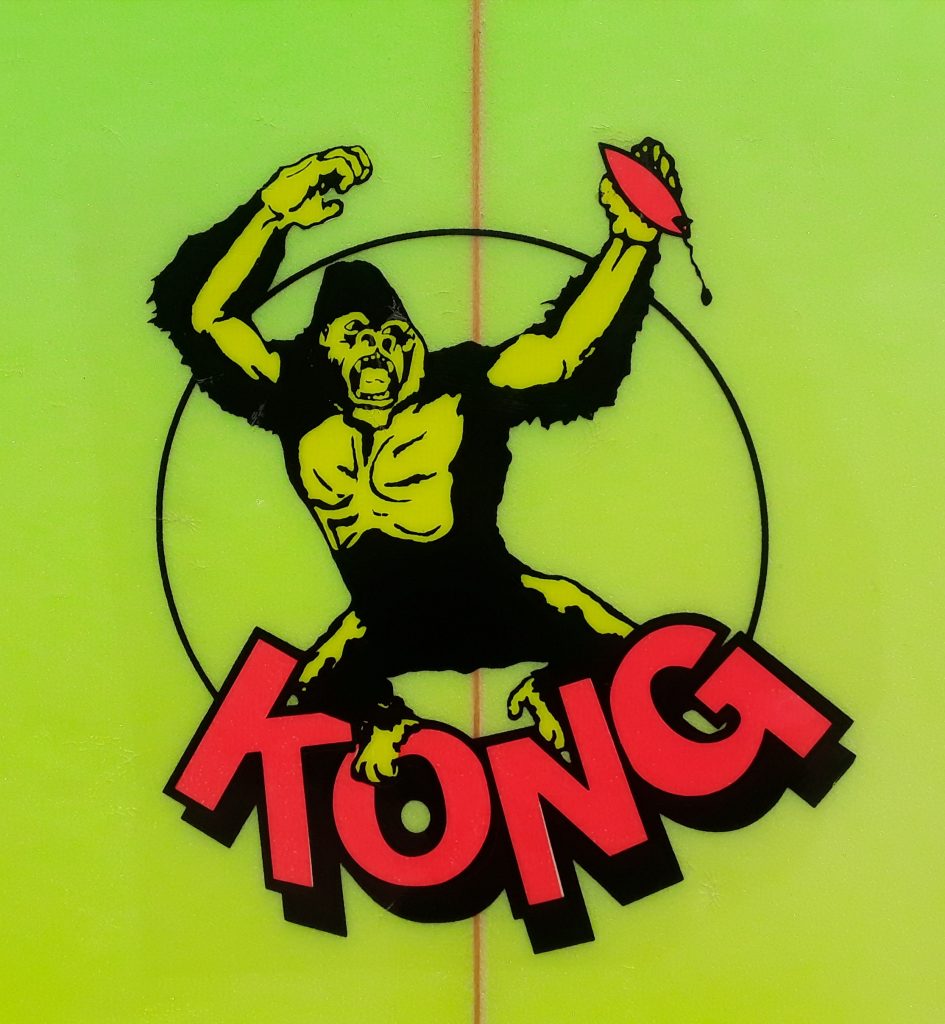 Greetings, Shredderz! Are you ready for a heaping helping of Eighties neon, brought to you by Hot Stuff, one of the finest Aussie surfboard labels of yesteryear. First and foremost, shout out to Steve, who is by far this humble blog’s most prolific source in terms of reader submissions. Steve picked up this incredible stick along his board collecting journey and was generous enough to share these pics. Anyway, pictured below is a Hot Stuff Kong Gary Elkerton model, shaped by Tom Eberly. Shockingly, Eberly doesn’t have his own Encyclopedia of Surfing entry, but he was part of the second wave of Lightning Bolt shapers, behind names like Lopez et al.

First of all, how gorgeous is this board?! The rainbow gradient airbrushes on the deck and the bottom are absolutely ridiculous. I’m stunned the board has remained in such great condition. Even the glass-on fins look like they’re still solidly fixed on.

Hot Stuff is an Aussie brand founded by Paul Hallas and originally based out of Currumbin on the Gold Coast. The brand might be best remembered for its association with Rabbit Bartholomew, who won a world title surfing  Many talented shapers have passed through Hot Stuff’s halls, such as channel bottom maestro Al Byrne (RIP), Neal Purchase Senior, Eberly and even a young Bob Hurley. The board featured here was almost certainly shaped in the US, given Eberly’s involvement. Another giveaway is the pair of laminates on the tail — the Clark Foam logo on the left and the West Coast Glassing logo on the right. Curiously, there’s a Quality Glassing devil logo, which I believe is an Australian glass shop. See here for an absolute cracker of an Al Byrne-shaped Hot Stuff stick with a Quality Glassing logo. Kong, of course, refers to power surfer Gary Elkerton, and it’s gotta be one of the greatest nicknames in surfing history. Kong helped bring Al Byrne’s famous six channel boards to life in pumping surf on his way to three runner up finishes on the world tour, and some virtuoso performances at Sunset Beach on the North Shore of Oahu. Byrne shaped for Hot Stuff before founding Byrning Spears, until his untimely passing a few years ago. The Hot Stuff Kong model, however, appears to have been made by other shapers for wider release. I can’t say who shaped the Australian Hot Stuff Kong boards, but Eberly and Bob Hurley helped shape the ones that appeared Stateside.

Unsurprisingly, Board Collector has posted some great examples of Hot Stuff Kong models. Here’s one with Byrne’s signature channel bottom design, although it’s unclear if Al shaped it himself. Board Collector has another example of an Eberly shaped Hot Stuff Kong board, which must have been shaped around the same time. Finally, There’s another post with an interesting selection of Hot Stuff sticks, including some Rabbit / Al Byrne collaborations. I was able to find another bitchin’ example of an Eighties Hot Stuff Kong board, this time on a website called Vintage Surf France. The French board also sports an amazing looking channel bottom, but again, I’m not sure whether it was shaped by Al, or if it was done by someone else. It’s in such great condition I’m wondering if it might be a newer reissue, although the traction pad looks like an older one.

Finally, it’s worth following Elkerton on his Facebook page. He doesn’t post all the time but there are some gems there, including an AB-shaped channel bottom that Kong credits for his contest wins at Sunset. It’s actually a Byrning Spears board, not a Hot Stuff, but still has the Kong logo. I’m guessing it was shaped shortly after Byrne left Hot Stuff to strike out on his own. At the bottom you can see an amazing shot of Rabbit and Kong both toting some awesome-looking Hot Stuff shapes (if you look closely you’ll see the AB logo peeking out on Kong’s board).

Thanks AB this is the board that you made for me in 84 that gave me all my wins at SunSet Beach, i rode this board 84,84,86,87 i was tagged Mr SunSet on her, RIP Bro she will be at your paddle out God Bless.

Look what I just found do you think I am stoked, I have been try to get 1 of these for years over the moon.

Me and Bugs early days in France.?

Once again I’d like to thank Steve for reaching out with pics of this killer board. If you have something similar and you’d like to see it featured here, please do let me know.