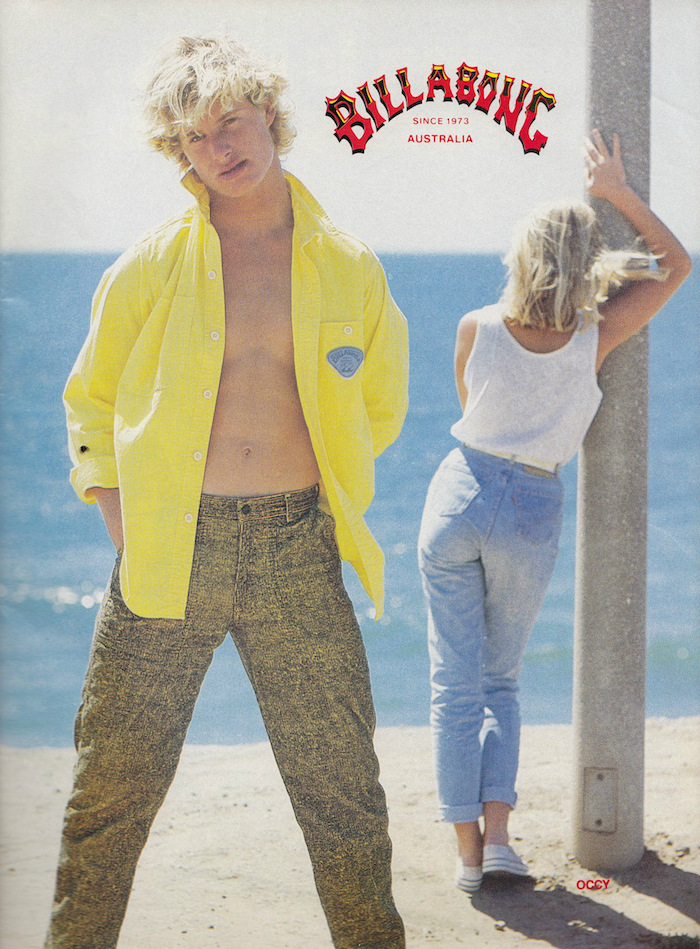 First, let me say that I am a huge Occy fan. For a while Occy was my favorite surfer, and his redemptive 1999 World Championship campaign was a huge inspiration to your Shreditor in Chief. Occ’s legacy is not only a spot on power surfing’s Mount Rushmore, but also a space as one of the most beloved Aussie characters ever to hit surfing. Occy’s still going strong today, and if you haven’t yet had a chance, I urge you to check out The Occ Cast. I never pegged Occy for a talk show host, but it turns out his guileless charm makes him a natural. Anyway, as you can see, I’ll sing Mr Occhilupo’s praises until the cows come home…but all that said, this Occy Billabong ad is downright hilarious.

The ad originally ran in Surfing Magazine in 1987 (Vol 27, No 2). I’m guessing the campaign must have been shot right after the peak of Occy’s early fame, on the heels of his back-to-back OP Pro finals against Tom Curren.

The clothes in this Occy Billabong ad are par for the course for the Eighties — that is to say, totally ridiculous — but I’m also oddly fascinated by the girl at the right hand side of the picture. Then again, there is a lot about Eighties surf ads that I will never understand, but that doesn’t stop me from getting a huge kick out of them.

Billabong and founder Gordon Merchant famously stood by Occy during his late Eighties / early Nineties swoon, and were rewarded with his feel good comeback win following Kelly Slater’s first retirement. In a way, Billabong is just as much a part of the Occy story as, say, a searing backhand attack at Bells Beach. It’s odd to say that now, when surf brands have hit an all-time low in terms of cultural relevance, but I’ll always associate Occy with his longtime sponsor.

As always, thank you for reading Sagas of Shred, and give us another visit next Thursday night for more vintage surf ads!