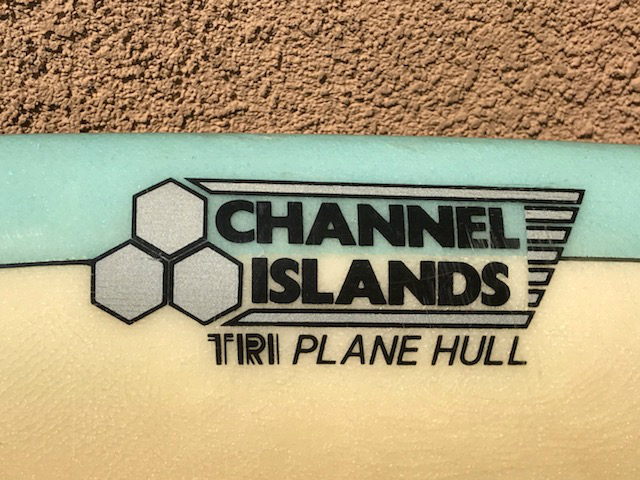 Greetings, Shredderz! Today we’re featuring a board from a label I haven’t written about for some time, but one that remains an all time favorite: Channel Islands Surfboards. CI is the label of Al Merrick, one of the most influential shapers of all time, thanks to collaborations with at least three surfers who are immediately recognizable on a one-name basis: Curren, Slater and Tomson. My first ever surfboard was Nineties Channel Islands thruster, and ever since then, I’ve had a soft spot for the brand. Of course, this being a vintage surfboard blog, I love older CI boards, and you can imagine my delight when someone reached out with some photos of a beautiful Channel Islands Surfboards Tri Plane Hull.

Click on either of the photos above to enlarge. Many thanks to Ryan, who shared the photos and story behind this sled. You can clearly see the double concave in the bottom (see the photo on the right). The double concave is one of the defining elements of Merrick’s Tri Plane Hull. Surfline recently ran an interview with Merrick in which he described the history and mechanics of the Tri Plane Hull design:

“Early on, the Tri Plane Hull was a big part of what I was doing. I started doing it in single fins. Actually, it was a take off on a Greenough bottom—not exactly like it, but a take off from it. I started using it on single fins then twin fins, and then on the thrusters. There was a lot of concave and curve about four inches from the rail, and then there was a double concave that went down between the fins. It was about lift and drive, giving it that extra punch, extra speed because [the concave] would straighten out the rocker through the center with the double concave. A bit of rocker through the tail, there was the vee back there so you had lift on either side. As you went side-to-side you’d get a little lift out of it, channeling the water between the fins. The Tri Plane was probably the most effective in the twin fins, but I used it in the Thrusters too. It was pretty popular with the guys and it gave the boards a lot more punch out of the bottom turn, and gave more drive to the board. It was probably a little easier [to ride] edge-to-edge—instead of having total concave across the bottom there was a lot of release on the edge of the board.”

Although I had never realized the Tri Plane Hull owed its history to Greenough, I can’t say I’m totally surprised, given Greenough’s near endless contributions to modern surfboard design. After a little digging I was able to find an example of a Sky Surfboards twin fin shaped by Michael Cundith. According to Von Weirdos, the Sky twin fin’s tri plane hull bottom was designed by Cundith, George Greenough and Chris Brock in the late Seventies. You can clearly see the resemblance between the Sky board and the Channel Islands Tri Plane Hull above. I’m still a bit taken aback by the dramatic double concave bottom in Ryan’s board, pictured at the top of the page. I’ve seen a few other CI Tri Plane Hulls and they seem to have much subtler concave bottoms. However, it’s hard to tell just by looking at photos, and unfortunately I haven’t seen any of these boards from this post in person.

Here is a killer @cisurfboards #triplanehull hand shaped and signed by #almerrick in 1978. I wrote a detailed post on this board and you can find some sweet pics, including the double wing tail and the original rainbow fin, by hitting the link in the bio ??????. Shout out to Shred Sledz reader Kenny G for the pics of his board! And get in touch if you own a rad stick that’s just dying to be featured. #shredsledz #channelislandssurfboards #vintagesurfboard #singlefin #almerrickthegoat Here’s another example of a Channel Islands Surfboards Tri Plane Hull single fin, likely from the late Seventies or early Eighties. It’s hard to say for sure, but the double concave looks far less pronounced on this board than on Ryan’s single fin above. Pic via an old eBay auction.

Anyway, returning to Ryan’s board, it has a very clear Al Merrick signature on the stringer, which I have reproduced below. (For more, you should also check out an earlier blog post I wrote about how to identify Al Merrick hand shapes.) Close up of the signature on Ryan’s Tri Plane Hull. You have the fish design, and in a somewhat unusual touch, a full “Shaped by Al Merrick” signature.

Ryan’s Channel Islands Surfboards Tri Plane Hull doesn’t have the classic “Al / Fish” icon as part of the signature, but I feel pretty comfortable declaring his board an Al Merrick hand shape. One note about the dates and the numbering: Ryan’s board is numbered #6653. The Tri Plane Hull I posted about on Instagram, which you can see further up in the post, is numbered #6044 and was apparently shaped in 1978. I’d roughly peg Ryan’s board as having been shaped in the late Seventies or maybe the early Eighties — assuming Merrick numbered his boards in order during this era. The Bob Haakenson logo is a welcome sight on any vintage Channel Islands stick!

It’s always worth noting that surfboard production involves more craftsmen than shapers. Bob Haakenson is one of Santa Barbara’s most distinguished surfboard glassers, and I always love seeing his logo on old Channel Islands boards. I recently had Haak repair a vintage Andreini single fin for me, which I’m still thrilled about, but that’s a subject for another post entirely.

Finally, Ryan’s board clocks in at 6’5″ x 20″ x 3″. Thanks again for sharing pics of this awesome piece of Santa Barbara surfing history, and if any of you Shredderz have some gems you’d like to see written up, you know where to find me!