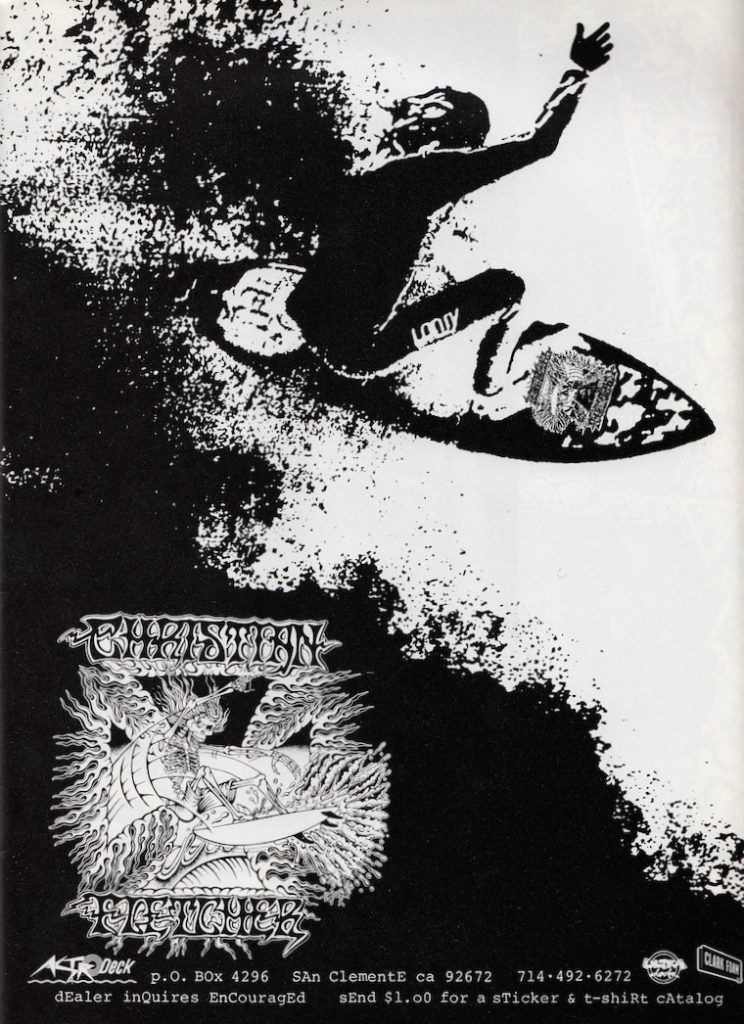 Greetings, Shredderz! Today we have a modern day classic for you: a vintage Christian Fletcher Surfboards ad from 1989. Yeah, I know, it was just last week when I ran another Christian Fletcher ad as part of the Sagas of Shred series, but what can I say: if it ain’t broke, don’t fix it. (And actually, if you must know, both ads come from the same original source — the June 1989 issue of Surfing Magazine, Vol 25 No 6).

First, I love the simple but effective black and white motif going on. It almost reminds me of some early Volcom creative. It’s a fitting aesthetic for Christian Fletcher’s image as one of surfing’s punk antiheroes. What’s interesting to me about this Christian Fletcher Surfboards ad is it features an alternate logo. If you look closely, you’ll notice that in the logo in the lower left hand corner of the ad, you have a skeleton busting a frontside air.

However, the better known version of the Christian Fletcher logo features a skull framed by a perfect A frame peak: Here’s an example of the classic Christian Fletcher Surfboards logo, which features a skull against a wave background. The board above was shaped by Steve Boysen.

Truth be told, I like the classic version of the logo better, but I think they’re both pretty cool. I’m not sure that I’ve ever seen a board with the aerial version of the Fletcher logo, but I always have my eyes peeled. And actually, it looks like the board Fletcher is riding in the ad at the top of the page has the aerial logo, but it looks to me like it was edited in.

As always, thanks for visiting (and hopefully, even reading this far!) Next Thursday night we’ll have another vintage surf ad for even more Sagas of Shred.