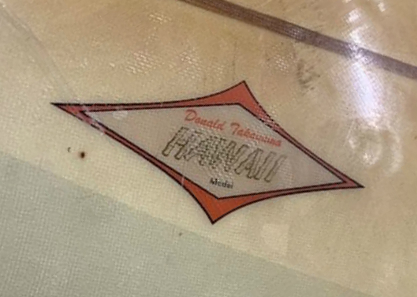 First, I’ll re-post the images that I shared on Instagram. I got these photos from the listing for an old auction, which you can find here. Note that Jacobs Surfboards had a separate Donald Takayama Model longboard. You can see an example of one here. The Jacobs Donald Takayama Hawaii Model, on the other hand, has a different laminate with the word “Hawaii” prominently featured in the center, as you can see above and in the photos below.

Click on any of the photos above to enlarge. According to the auction listing, the Takayama Hawaii Model was shaped in 1968 and it measures in at 8’6″.

The photos above are of Marty’s Jacobs Surfboards Donald Takayama Hawaii Model. As you can see, his photos provide some great context on the design elements of this rad surfboard. You can really see the extra foam in the tail as part of what looks like an S Deck, which isn’t really visible from the pics of the auction board. Overall, Marty’s photos really help shine a light on what I would almost call the more hull-like properties of the board. The fin looks identical to the one on the auction board, except it’s yellow on Marty’s stick.

The other thing that’s interesting to me is Marty’s board has a slightly different logo. It’s hard to tell, but if you look at the pics from the Jacobs Donald Takayama Hawaii Model sold at auction, the logo is in black and white. As you can see directly above, though, Marty’s Takayama Hawaii Model has some red in the logo. Otherwise the boards look extremely similar.

Thanks again to Marty for sharing these pics! If you have any super rare boards you’d like to share, don’t hesitate to reach out.