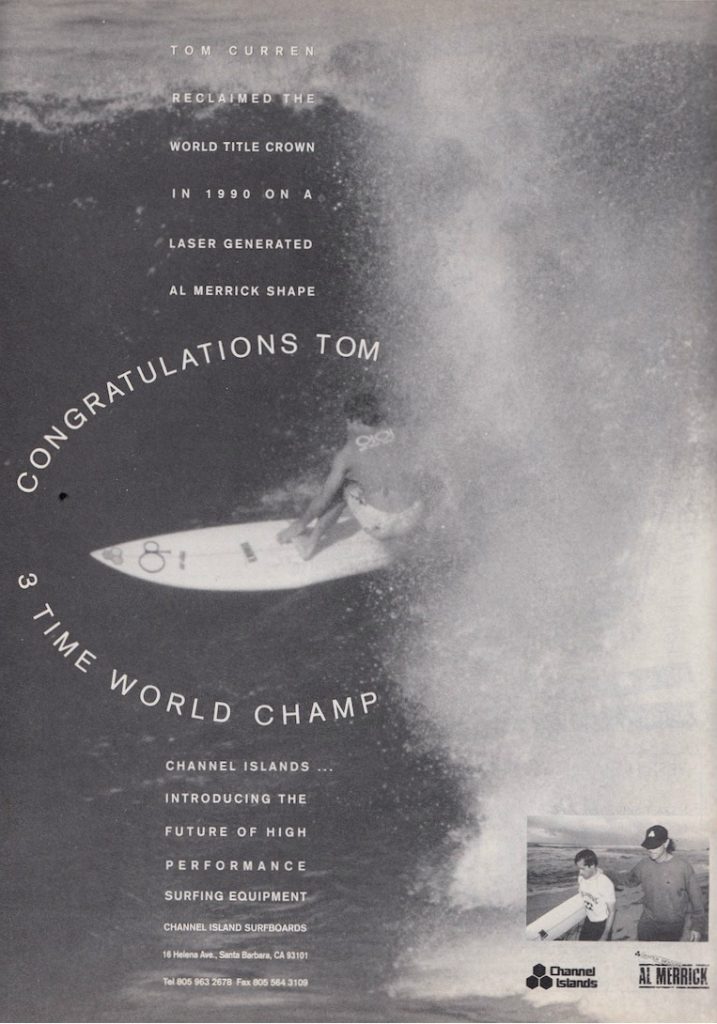 Greetings, Shredderz! As always, it is late on Thursday evening, California time, which can only mean an incoming post about a vintage surf ad, courtesy of Sagas of Shred. This time around we have another tried and true classic: a Tom Curren Channel Islands Surfboards ad congratulating him on his third world title.

What’s interesting about this ad is the fact is the line about Tom Curren surfing his way to a title on “a laser generated Al Merrick shape.” I’m wondering if this isn’t a reference to an early version of a shaping machine. While Channel Islands employed a number of ghost shapers for years to meet demand, it would later become one of the largest surfboard manufacturers in the world, thanks to the use of shaping machines. I can’t say for sure whether this Tom Curren Channel Islands ad is specifically referencing that shift, but either way, it’s an interesting mention.

Curren cranking off the bottom. I’m almost certain this is the same board as the one pictured in the ad at the top of the page, which I’m guessing was taken at the 1990 Pipe Masters. Photo by the peerless Art Brewer and via Surfline.com

A few years back Surfline published a post wishing Curren a happy fiftieth birthday, and it contained the Art Brewer photo you see above. I’m almost certain this is the same board from the Tom Curren Channel Islands ad featured at the top of the page. You’ll notice the same Marui singlet, and I can only guess this came from the Pipe Masters during 1990. I’m not sure what advantages one gets from riding a “laser generated” surfboard, but it seems to work good enough for one of the greatest surfers ever at the sport’s single most iconic spot.

As always, thanks for checking out Sagas of Shred, and stop on by next Thursday evening for yet another vintage surf ad.