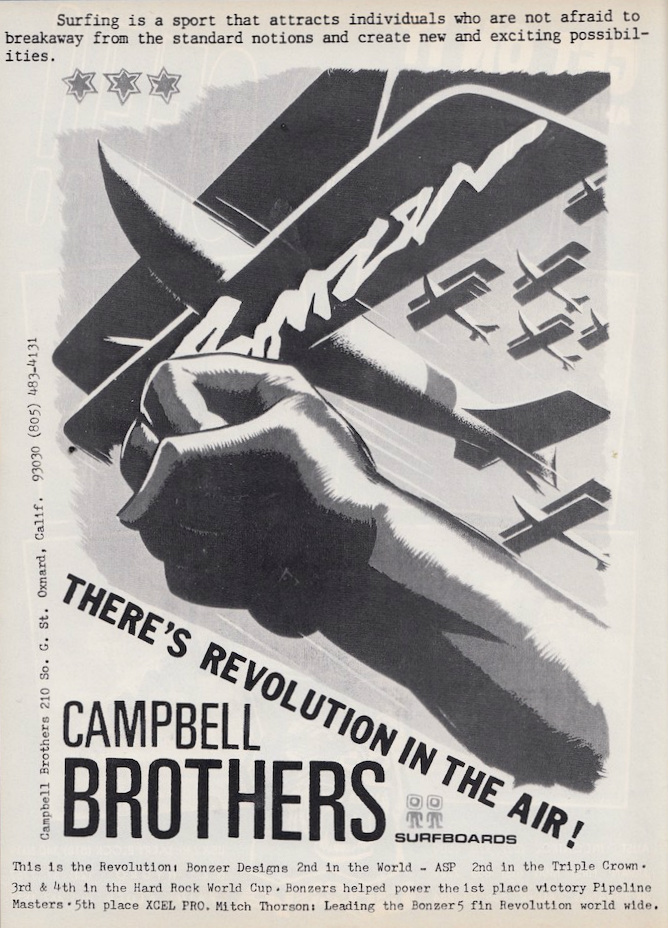 Greetings, Shredderz! What, you thought just because it was a national holiday the Sagas of Shred train would come screeching to a halt? Think again, amigos, because just like every other Thursday evening, we are coming in hot with a vintage surf ad for your viewing pleasure. Today we have a Campbell Brothers Surfboards ad that originally ran in the May 1991 issue of Surfing Magazine (Vol 27 No 5).

The Campbell Brothers have never been ones to conform, whether it’s fin setups or political views. Thus the military propaganda style imagery of the Campbell Brothers Surfboards ad featured above doesn’t come as a huge surprise. The stark black and white lines are a significant departure from the dominant aesthetic of the late Eighties and early Nineties, which favored bright graphics and lighthearted, feel good messages. I love the old school Bonzer script logo splashed across the bi-plane, which took me a bit of time to even notice.

While I can’t personally claim to regularly surf Bonzers, there are plenty of ultra talented surfers who have joined the Campbell Brothers’ revolution. One such surfer is Alex Knost — check out some of his stylings on a Russ Short model in the video below. The Campbell Brothers’ place in surfing history is assured, thanks to their groundbreaking design and the accompanying decades-long effort to spread the word of its high performance capabilities.

Finally, given that it’s the waning hours of Thanksgiving here in the States, I’d like to offer a few words of gratitude to anyone who has made it this far through this post. If you’ve ever read the blog, checked out my Instagram, or even laughed at one of the pitiful dad jokes littering this site — okay, that’s probably taking things too far — then I can’t thank you enough. Frankly, I’d write Shred Sledz even if no one read it, but the knowledge that there are a few people who actually enjoy what I do makes it all the better.