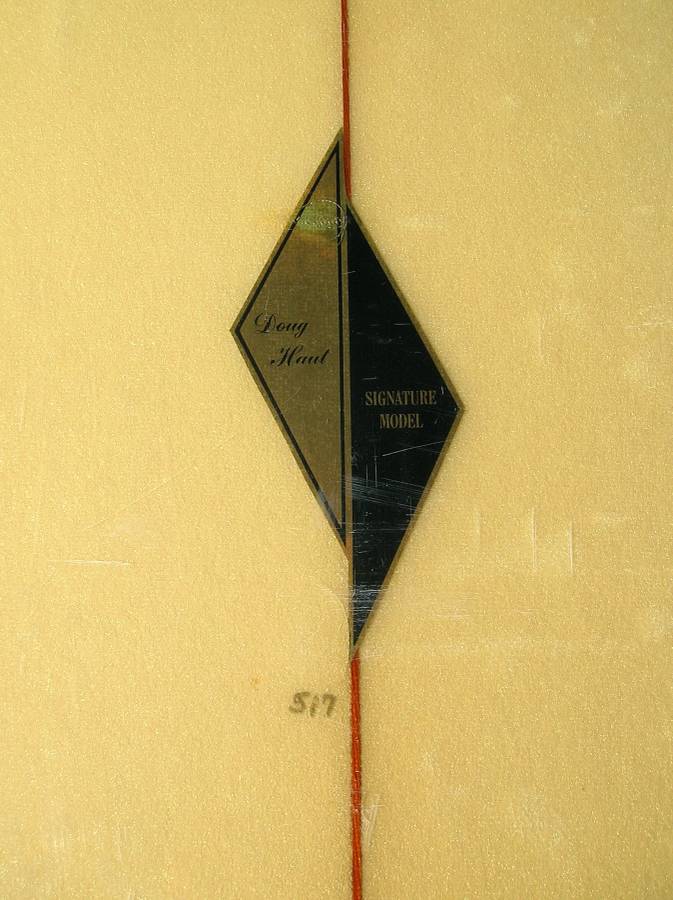 Greetings, Shredderz! Hope everyone here Stateside had a wonderful Thanksgiving. If, like me, you live in Northern California, you’re well aware of Santa Cruz’s status as ground zero for high performance surfing in the area. Santa Cruz has more than its fair share of talented surfers and great waves, but likely due to its distance from the Orange County / San Diego epicenter of the surf industry, Santa Cruz doesn’t have quite the same visibility of its Southern counterparts. I imagine this is all well and good with the locals, who might prefer to keep their little cold water paradise to themselves. That said, I’d like to take the opportunity to feature some vintage boards from some of Santa Cruz’s best shapers. Keep reading for more…

I believe it was none other than fellow NorCal craftsman Marc Andreini who dubbed Doug Haut Santa Cruz’s answer to Renny Yater. The comparison is an apt one, as Haut continues to produce clean, functional shapes for surfers who frequent Santa Cruz’s famous right hand points. The seller claims the board was shaped in 1966. As you can see, it sports a gorgeous glass on fin and overall it’s in great condition. No price listed. Pro tip: if you’re in the market for a lightly ridden Marc Andreini personal rider, he’ll often sell them at Haut Surf Shop (and, of course, you can order a custom board directly from Doug himself).

Sorry Shredderz, I can’t divulge where this one is posted. But it is listed for sale somewhere on the internet, so I’ll just leave it at that. Anyway, this is a pretty unusual Haut board in that it’s a Transition Era hull. No dimensions are listed but the seller claims it was shaped in 1968. The serial number on this Haut board is #1096, compared to #517 for the longboard above. Given the two year span between these two boards were shaped — assuming both sellers are correct — the numbering sounds about right. I’m a big fan of hulls in general, and I also love the wedge stringer. Sadly I can’t quite make out what kind of fin box it is. No dimensions are listed, and the seller is asking $1,600. This seems pricey to me, but it is a very cool board from one of Santa Cruz’s finest.

Whenever I surf around Santa Cruz, I see more Pearson Arrows than any other kind of board. I actually featured the board above on Instagram earlier this year. It just reappeared on Craigslist and I had to write up this gem. I absolutely love this board, and it’s an unusual older example from one of Santa Cruz’s best known shapers. The modern Pearson Arrow logo, made famous by Jay Moriarty (RIP), will forever be my association with Bob Pearson’s label. That said, I actually prefer the clean original logos seen above. The seller is asking $675, and the board apparently needs a few repairs. I’m a little thrown off by the blue fin box, but can’t say for sure whether or not that’s a sign that some major surgery was done at some point. This is a gorgeous board no matter which way you cut it, and Pearson’s status as a go to shaper for Santa Cruz locals speaks for itself.

The best part about this post? Bob Pearson and Doug Haut are still making boards today! Check out either one of their sites for info on their boards: Haut Surfboards and Arrow Surf Shop.