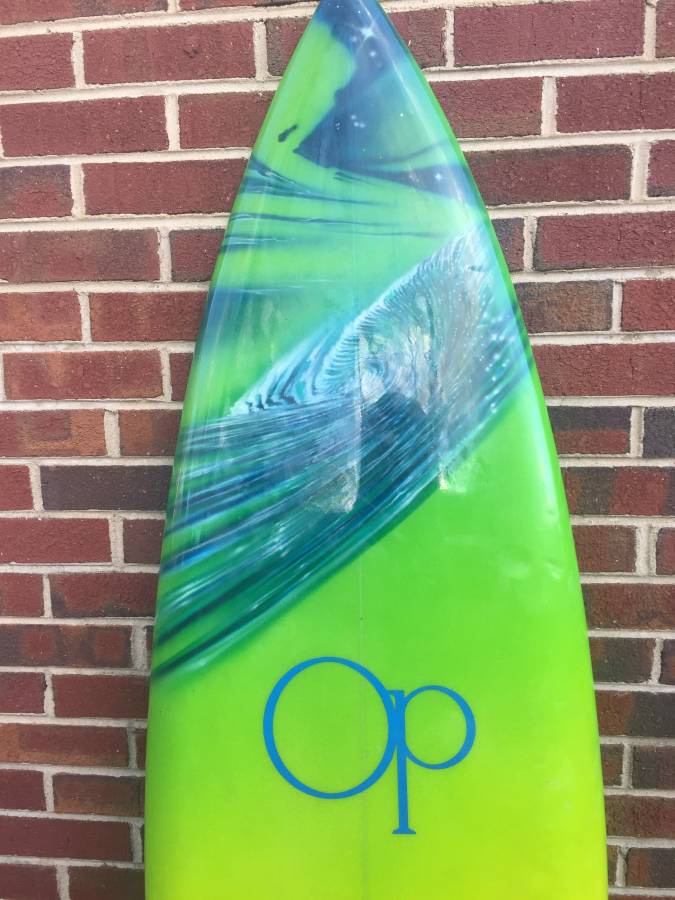 Greetings, Shredderz! As always, here’s another installment of our Weekend Grab Bag series, which features cool boards I have seen listed for sale online recently. Keep reading for the rundown, including a rad OP surfboard with a sweet Bill Stewart airbrush, and more… The board above is an unusual twin fin fish with a classic Seventies Surf Line Hawaii laminate on it. I wrote a Deep Dive on Surf Line Hawaii a while back, and it remains one of my favorite blog posts, even if it doesn’t seem to be all that popular. I’m not sure who shaped the board, and I suspect it might have been originally made as a twin fin, but just about every other Surf Line Hawaii surfboard I have seen is a Seventies single fin.

Click the photos above to enlarge. This is a gorgeous Transition Era surfboard that comes complete with a WAVE Set fin. The board has been restored by Randy Rarick. I have a weakness for hulls of all shapes and sizes, and this one definitely fits the bill. Bill Stewart’s airbrushes were the subject of the most recent installment of the excellent Surfboards and Coffee series. This OP Surfboard has a pretty bitchin’ Bill Stewart airbrush, which you can also see in the image at the very top of the page. The board is priced at $475. It also happens to come with what looks like an original Rainbow Fin, so if you’re local, this could be worth it with the Bill Stewart airbrush and the collectible fin.

Anecdotally, I see a lot of Hobie Corky Carroll models floating around for sale on Craigslist, eBay, etc. I’m guessing they were produced in pretty high numbers during the Sixties. The Hobie Corky Carroll model featured above is a stringerless variant, which I don’t believe I have ever seen before. Looks like the glass leash loop was probably added after the fact, but it’s still a very cool board complete with the original bolt through fin.