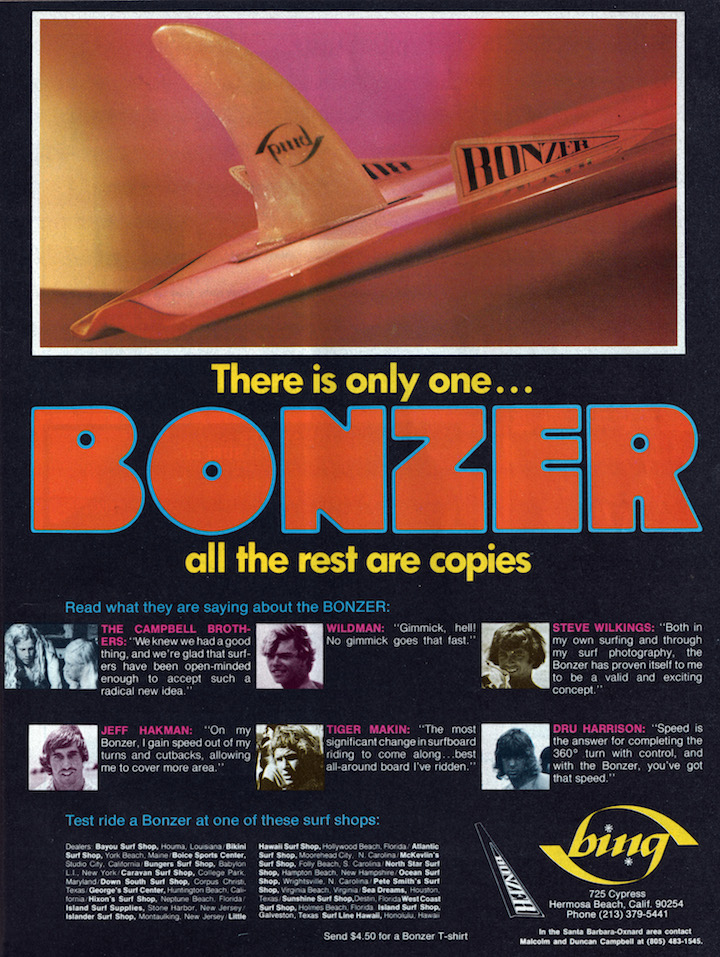 Greetings, Shredderz! It’s Thursday evening here in California, and so I’m obligated to serve up some more vintage surf ads for all you kind folks. Usually, the Sagas of Shred series features ads that I have personally scanned from my stash of Surfer Magazine back issues. Today’s post, however, features an ad that I found somewhere on the internet. If this is your original scan or upload please let me know so I can give credit where it is due! Anyway, today we have a vintage Bing Bonzer ad. The original file had 1973 in the filename, so I’m guessing the ad may have run that same year. According to the old Stoked-n-Board archives, the Bing Bonzer was produced between 1973 and 1976, so the timing adds up. Still, I don’t have any confirmation around the date.

That said, it’s probably best to focus on the downright sexy curves of the cherry red Bing Bonzer featured in the advertisement. I’ve geeked out about the Bing Bonzer many, many times before, and I still can’t get enough! By now you may know that I’m a huge fan of the branded side bites, but you can also see they’re complemented by a cool Bing branded fin in the ad above.

Last but not least the testimonials are all-time, too. Who is Wildman?! More importantly, the Bing Bonzer bears the stamp of approval from folks like Steve Wilkings, Jeff Hakman, Dru Harrison, and of course, the Campbell Brothers, who were responsible for creating the landmark design in the first place. Tiger Makin was a Rick Surfboards team rider alongside Dru Harrison. Between Makin and Dru Harrison, along with Rick Surfboards’ early ties to the Bing label, this rare Rick Surfboards / Mike Eaton bonzer I posted on Instagram recently is starting to make more sense. I had no idea that Hakman and Harrison had anything to do with the Bonzer before seeing this ad. Then again, the Bonzer has had no shortage of notable fans in its forty plus years, ranging from the folks mentioned above to people like Taylor Knox and Alex Knost.

Tune in next week for more Sagas of Shred!