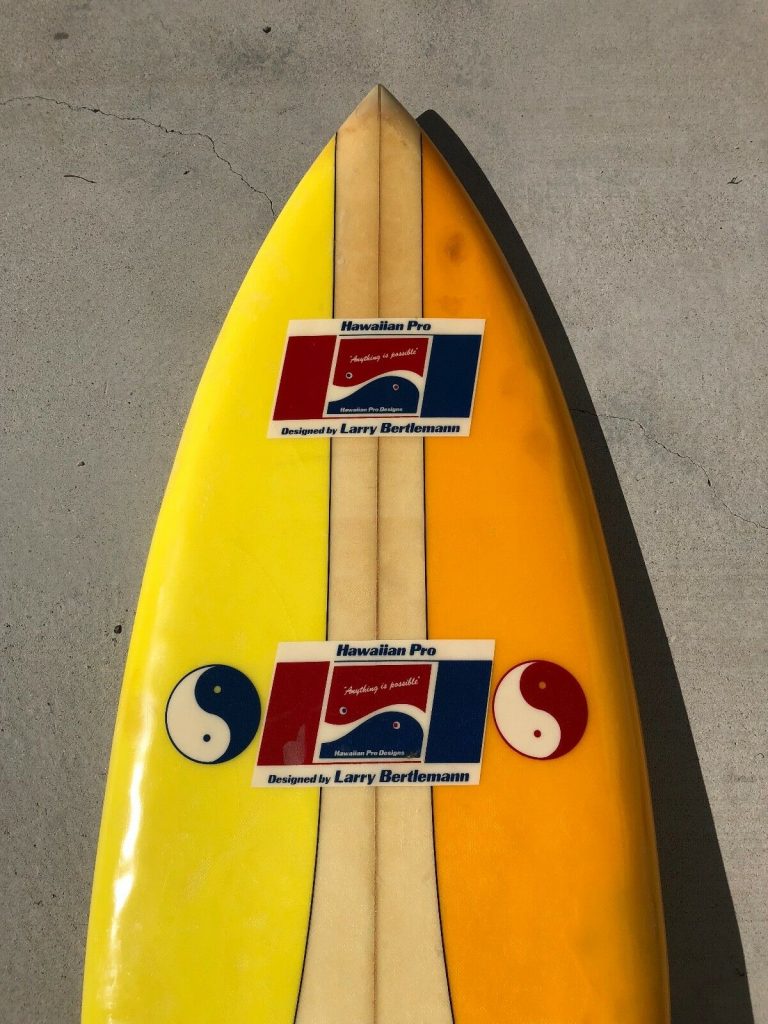 Greetings, Shredderz! Today we’ll be examining one of the most coveted signature sticks out there: a T&C Surf / Hawaiian Pro Designs Larry Bertlemann surfboard. As I have written about before, getting concrete information on surfboard prices can often be tricky, but eBay makes things slightly easier, thanks to the fact it keeps up posts on completed listings even after the sale has closed. The Hawaiian Pro Designs Larry Bertlemann surfboard featured here just closed earlier today on eBay, and thankfully, the listing still has pics and prices. You can find the listing here; all photo in this post are via eBay.

This Hawaiian Pro Designs Larry Bertlemann surfboard closed at a cool $1,085, with an option to ship the board within the US for an additional $100. The board is a swallow tail twin fin and it measures 5’10” x 20″ x 3″. On one hand, I can’t say I’m that surprised, as these Larry Bertlemann boards are super popular among collectors. On the other, this board has discoloration throughout, and some additional restoration work has been done, too. The board is in decent condition, all things considered, but it’s also clearly not a perfect example. I see the price as an indication of how collectible Bertlemann surfboards are, given that it still went over $1K, even with its various imperfections. I’m curious to see what a similar Larry Bertlemann surfboard in excellent condition might fetch — I can’t see one going for anything less than $2,000, but that’s only a guess. Larry Bertlemann, AKA The Rubberman, going vertical. Photo by Jeff Divine and via a Juice Magazine interview between LB and Zephyr’s Jeff Ho

I also don’t know who shaped the board. Bertlemann shaped some of his own surfboards. According to SurfboardLine.com, Takayama also shaped some twin fins for Bertlemann during the Seventies, but I’m not sure when. These Larry Bertlemann surfboards were produced under license in Australia for a while, too, but again, I’m not clear on who the production shapers were.

Finally, see below for a little video produced by Buggs Arico, the collector behind the aforementioned SurfboardLine.com. Buggs’ site has a great entry on Bertlemann, including a killer Larry Bertlemann surfboard producer under the killer Hot Lips Designs label, so check that out if you get the chance.