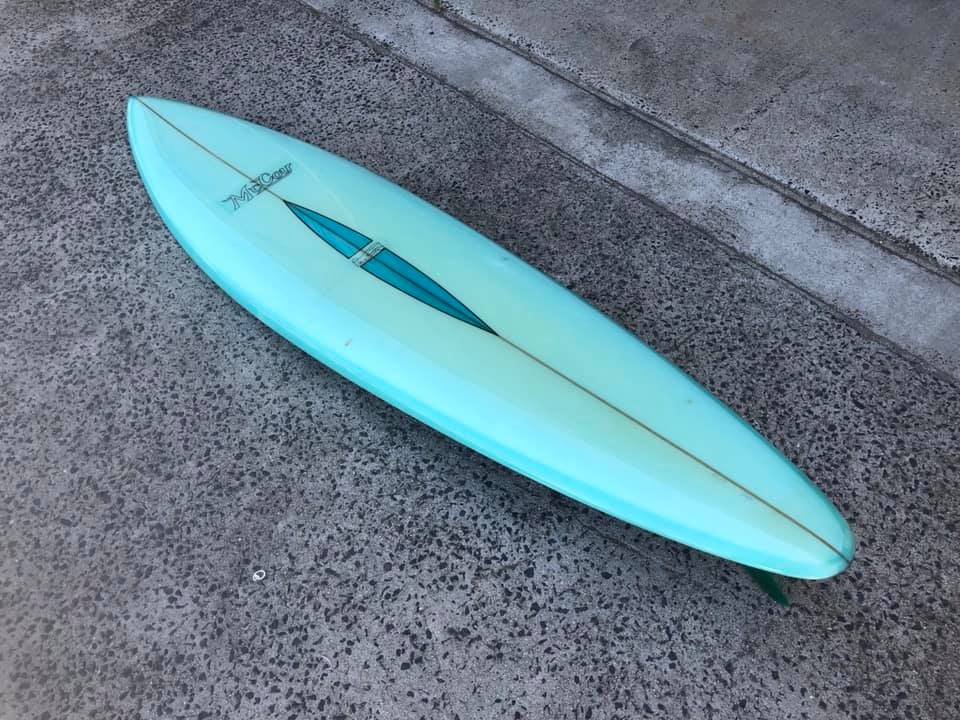 Greetings, Shredderz! As some of you may know, I have a fascination with surfboards that represent collaborations between Aussie and Hawaiian shapers. For example, here’s an incredible Terry Fitzgerald Lightning Bolt single fin I wrote up, and a separate board TF shaped for Dick Brewer. The board featured in this post is a mashup of McCoy Surfboards, a classic Australian label, and Barry Kanaiaupuni, the Hawaiian pro who helped define power surfing. The best known BK signature board is the Rick Surfboards Barry Kanaiaupuni Model, which came as a noserider and then later as a Transition Era mini gun. BK also famously made boards for the Lightning Bolt label during its heyday. The board you see here is a vintage 6’10” McCoy Surfboards Barry Kanaiaupuni Model that was made under license in the early to mid Seventies.

You can click any of the photos above to enlarge. First, many thanks to Rory Oke, who provided photos of the board you see featured in this post. I originally saw the board posted to the Vintage Surfboard Collectors group on Facebook, and Rory generously gave me permission to run a blog post featuring his photos. Based out of Victoria, Australia, Rory shapes under the Oke Surfboards label, and he also restores vintage boards. You can check out his website here and his Instagram page here.

Until I had seen Rory’s board, I didn’t even know that Kanaiaupuni had any association with the McCoy Surfboards label. It turns out that McCoy licensed designs by a trio of Hawaiian shapers during the Seventies: Barry Kanaiaupuni, Reno Abellira and Sam Hawk (I think technically Hawk is from California, but my impression is that the most impactful years of his career took place in Hawaii under Dick Brewer’s tutelage). Surf Research has a great example of the Reno Abellira McCoy model, along with some explanations about the board’s history from Reno himself (note the mis-spelling of Reno’s last name on the laminate). You can see the BK McCoy model in the top left. Ad was posted to the same thread on the VSC group on Facebook where the BK board pictured here was posted.

Check out the McCoy Surfboards ad featured above, which originally ran in an issue of Tracks Magazine in 1973. You’ll notice that the top left board is the McCoy / BK model.

I believe the vintage McCoy Surfboards Barry Kanaiaupuni single fin featured here has been restored. As you can see, it looks to be in lovely shape, and most of the details of the board have been well preserved. It has an absolutely beautiful Coke bottle blue resin tint, and I love the extra color on the center of the deck too.

One curious thing to note: I’m not sure if the blue board was hand shaped by BK himself. You can clearly see the “Designed by Barry Kanaiaupuni” laminate on the deck, but I don’t know if there is a signature anywhere else on the board. The red McCoy BK model, by contrast, looks like it was signed by Kanaiaupuni on the stringer.

I’ll never get sick of cool Aussie / Hawaiian surfboard mash ups, and the McCoy BK model definitely fits the bill. Thanks again to Rory for kindly allowing me to use the pics you see here. And if you have any photos of similar boards, don’t hesitate to drop me a line!