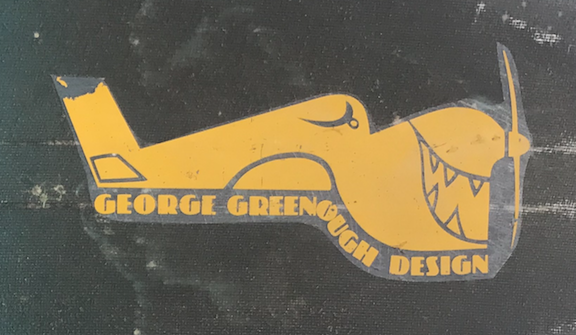 Greetings, Shredderz! Today we’ve got a real doozy for you. Featured here is an absolutely insane George Greenough Design edge board shaped by Bob Duncan of Wilderness Surfboards. All of the photos come courtesy of a fellow Shredder in New Jersey who would like to remain anonymous. He stumbled across this board while on an adventure in California, and was kind enough to share the photos you see here.

The George Greenough Design edge board featured here is actually a sail board. In the photo of the deck you can see a slot for a sail, as well as where the foot straps would have been placed. The George Greenough Design edge board was shaped by Bob Duncan in either the late Eighties or early Nineties. It was apparently made for large swells at Razor Blades, a spot within the famed Hollister Ranch.

The edge board comes from the fertile mind of George Greenough, the legendary and reclusive design genius who helped usher in the shortboard revolution, and is still influencing surfboard design today. Recently Greenough’s edge board has undergone a revival of sorts thanks to a lineup of well-regarded shapers, including folks like Marc Andreini, Kirk Putnam, Scott Anderson and Manny Caro. Andrew Kidman and Ellis Ericson recently released a film / book project called “On the Edge of a Dream”. Kidman and Ericson’s project documents their explorations of Greenough’s edge board design, which were produced in collaboration with Greenough himself.

What makes the Bob Duncan / George Greenough Design sail board interesting is the fact it was shaped well before the current edge board craze. The best summary of the history of Greenough’s edge board can be found in Marc Andreini’s excellent book “The Gift.” The relevant chapter on the Greenough edge board was excerpted in Liquid Salt. Greenough invented the edge board in the Sixties, and by the Seventies, surfboard shapers had shifted their attention elsewhere. Greenough began windsurfing in the early Eighties, and during this process he rediscovered the benefits of the edge board design. One of Greenough’s famous sail boards was a 7’3″ shape he dubbed “The Backyard Special”, which was profiled in The Surfer’s Journal. The Backyard Special was an edge board that helped prove the benefits Greenough had initially envisioned about the design.

The way Greenough tells it, the Backyard Special was a magic board. In 2014, when Greenough decided to shape some surfboards for Dave Rastovich following a multi-decade hiatus, he drew on the edge board concepts from the Backyard Special. The end result were two edge boards, one of which Rasta surfed at decent sized Cloudbreak.

Rasta’s Fiji trip was also chronicled in the Surfer’s Journal. You can find the original article here, which was originally published in 2014 (and if you don’t already subscribe, you really should.) Rastovich, in turn, mentioned the Greenough edge boards to Ellis Ericson during a trip to the Maldives. Ericson and Kidman then collaborated with Greenough to produce updated versions of some of his famous designs, and documented the entire process for “On the Edge of a Dream.”

Back in California, it appears that Bob Duncan had been shaping interpretations of the George Greenough Design edge board concept since the late eighties and early nineties, right when Greenough was pushing the limits on his Backyard Special. Perhaps Duncan was in touch with Greenough at this time, or word of Greenough’s edge board designs had gotten back to Duncan somehow. It’s not clear to me how Duncan initially picked up the edge board concept. That said, Wilderness Surfboards, the label under which Bob Duncan shapes, was actually founded by George Greenough and Michael Cundith. However, it appears Greenough hasn’t been involved with the label (either its Santa Barbara or New South Wales variants) for a while now.

In addition to the George Greenough Design sail board featured here, you can find plentiful evidence of other edge boards shaped by Bob Duncan. See below for a photo of an edge board gun with a thruster setup that was shaped in 1993.

Kirk Putnam also published a photo of a Bob Duncan edge board on his blog back in 2011, a few years before Greenough shaped his boards for Dave Rastovich. You can see the photo below:

Thanks again to the mystery Shredder in New Jersey who shared these photos of the Bob Duncan / George Greenough Design edge board. It’s a fascinating window into a design that has roots both in California and Australia, spanning across decades of surfing history, involving a number of talented surfers and craftsmen.