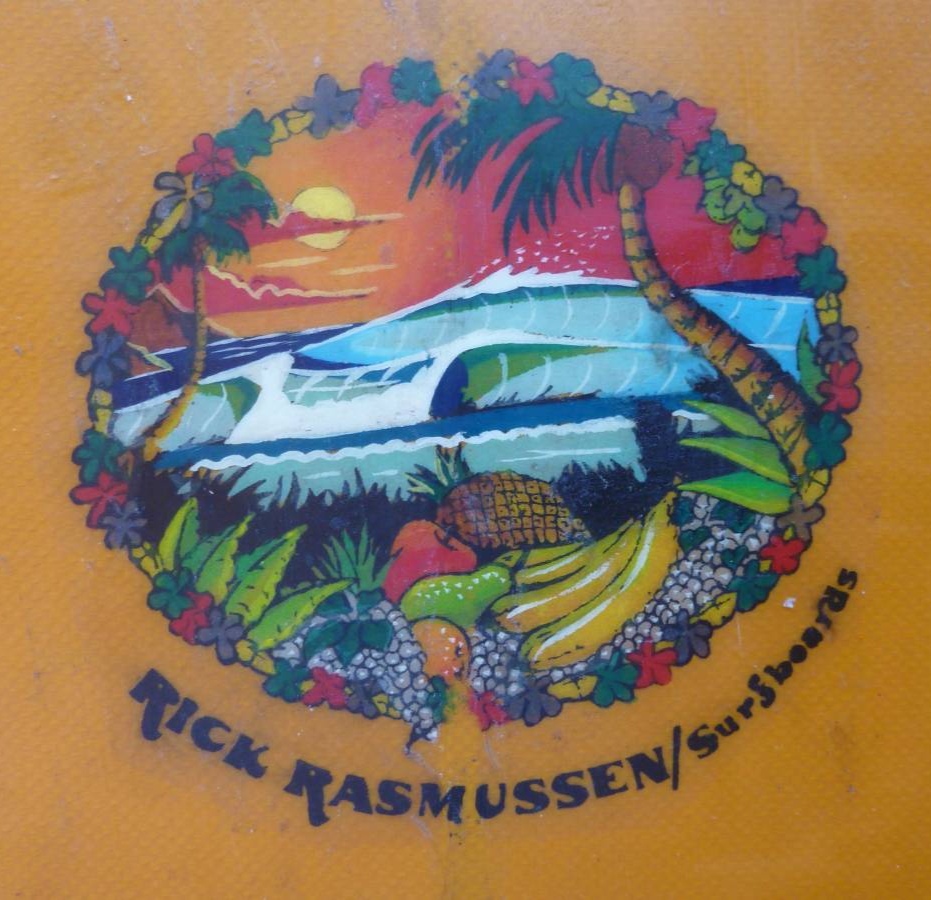 Greetings, Shredderz! In honor of fellow New York native Balaram Stack’s finals finish at the 2019 Volcom Pipe Pro, here’s a beautiful Rick Rasmussen surfboard that was recently sold on eBay. All pics in this post are via the eBay listing, which you can find here. Rasmussen is one of the more fascinating characters in surf history. For many years, Rasmussen stood alone as New York’s only real pro surfer of note, thanks to his competitive prowess in the early professional scene, as well as his tuberiding in places like Pipeline and G-Land. Sadly, Rasmussen’s story cannot be told without mention of his tragic death, which happened during a drug deal gone bad. The Encyclopedia of Surfing has reprinted an excellent article detailing Rasmussen’s passing, which gives some additional depth to an already compelling subject.

The board, despite not being in great condition, sold for a cool $1,725. The price, when considering the condition, gives you a good idea of how rare it is to find a Rick Rasmussen surfboard for sale. The board measures in at 8’2′ x 19 3/8″ x 2 3/4″ and according to the seller it was likely shaped in either 1972 or 1973. The listing claims the board was mostly surfed on the North Shore in the Seventies before being relocated to Southern California in 1980, and then it was stashed away in storage for many years. I think there’s a decent chance that Rasmussen rode this board at Pipeline, which makes it extra sick.

What was the name of the first surfboard label Rick Rasmussen shaped for ? First person to get the correct answer wins a bunch of KBoX gear.. #rickrasmussen #NY

Luke Moore, from Westhampton but longtime resident of San Diego, shared this photo with me last night. Luke is on the left, age 14 and Rick Rasmussen is on the right, age 18. This is taken in 1974, the year Rick won the U.S. Championship. Rick shaped both boards. Luke currently shapes out in San Diego and still does boards for some of the older guys out east on LI. Luke was also a legendary skateboarder, draining pools in the hamptons in the fall during the 70s. I asked him how he got into skateboarding and he said, "I just learned, mostly from surfing. I mean, surfing taught me skateboarding." His style shocked and awed Jay Adams, Peralta and others, and was developed completely in the Eastern LI incubator at that time. Surfing, Luke charged Pipe like a lot of his peers from the Westhamptons, and with their own style. A Westhampton relationship with second reef Pipe is starting to become clear to me #LukeMoore #RickRasmussen #BrendanBurrMcGill etc please tag more