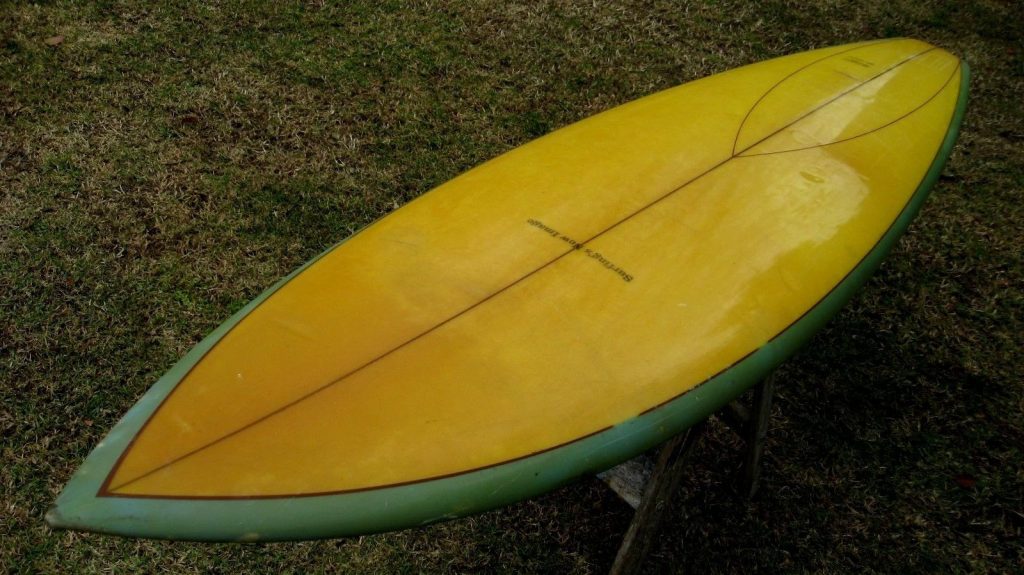 Greetings, Shredderz! Today we’re taking a quick look at a board that recently caught my eye. Pictured here is a Surfing’s New Image surfboard shaped by Donald Takayama. The board was originally listed for sale on eBay, and all pics in this post are via the eBay listing. You can find the original listing here. I’ve long had a bit of a fascination with the SNI brand, whether it’s the Aipa stings that were produced under the label (although most SNI / Aipa stings were not shaped by Ben Aipa), or some of Rick Hamon’s later designs. If I had to choose, though, I’m probably most fond of the SNI boards that were shaped by Donald Takayama. Takayama, of course, was a surfing fixture for decades, whether it was as a Velzy / Jacobs team rider during the sport’s earliest days, or his collaborations with Joel Tudor starting in the Nineties. The Surfing’s New Image surfboard pictured here is an unusual one. First, I would say that you don’t see a ton of Takayama / SNI boards in general, but this one is the only example I have seen that has a Dru Harrison laminate on it. According the listing, the board measures in at 7’0″ x 19 1/2″ x 3″. The board was almost certainly shaped sometime during the Seventies, though I’m not sure what year. Dru Harrison’s best known surfboard is the Improvisor model he produced under the Rick Surfboards label during the Sixties. Here’s an example of a Rick Surfboards Dru Harrison Improvisor that recently sold on eBay as well.

The SNI board sold for about $150. Even though the board would require a decent amount of repairs, I still think this is a pretty good price. After all, this is a Donald Takayama we’re talking about! From what I have seen, the SNI / Takayama boards can be had at fairly decent prices. Here’s another example of a Seventies SNI / Takayama stick that sold for $575, which I thought was a nice price from the buyer’s perspective.

Sadly, I can’t find any information on Takayama and Harrison’s relationship. I’m guessing they must have crossed paths in the South Bay in the Sixties. During this time Harrison was riding for Rick Surfboards, and Takayama was designing boards for both Bing Surfboards and then Weber. Considering the high profile of both men involved in making this board, you’d think there would be a little more information available.

You can check out the original eBay listing for the Surfing’s New Image surfboard designed by Dru Harrison and Donald Takayama here.