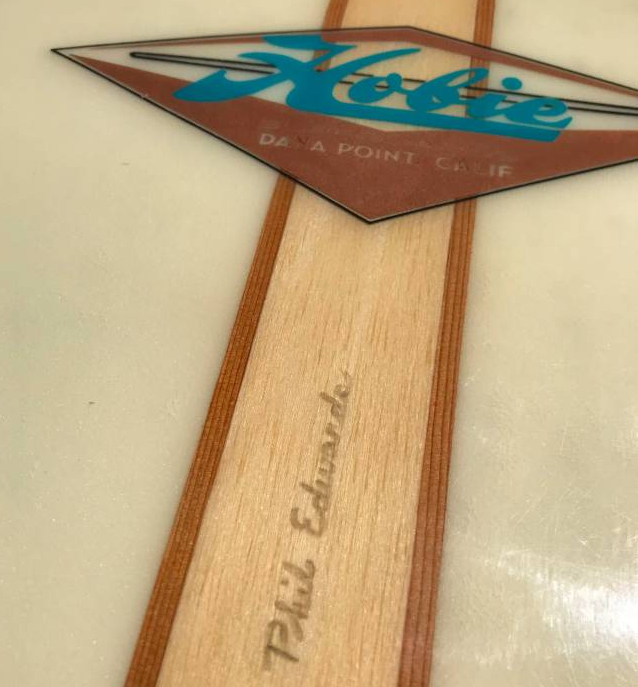 Greetings, Shredderz! By now you should know the drill: it’s the latest edition of the Weekend Grab Bag, where I spotlight some great boards I have seen listed for sale. As always, all of the postings are live as of the time the blog post was published. Onto the fresh batch of vintage sticks, beginning with a Donald Takayama Scorpion in clean condition. The Donald Takayama Scorpion just might be one of the most famous models from Takayama’s long and distinguished shaping career. The vast majority of Takayama Scorpions I have seen are the epoxy versions, which were obviously not hand shaped by DT. (For what it’s worth, I borrowed a friend’s epoxy Donald Takayama egg once and absolutely loved it.) The Scorpion featured above is 7’4″ x 22″ x 2 7/8″ and the seller is asking $800. Takayama himself signed the board in pencil on the stringer. I have also heard that some of these later-era DT boards were shaped with the assistance of a shaping machine. I would guess this board is late 90s to early 2000s, given the FCS fin boxes for the side bites. Either way I think this is a nice price for a very cool board. The seller claims this vintage Skip Frye fish hasn’t been surfed in at least twenty years. As for an exact date, I’m hard pressed to tell you anything. I want to say most Skip Frye fish I see have wooden Gephart keels, but this example has fiberglass ones. Here’s what the seller has to say about the fins: “This board has great fins a modified Keel fin template by JB that is less deep then (sic) a normal keel and rides more loose in the water.” I don’t know who JB is, but I dig the vintage-ish date of the board. It’s 6’6″ long and looks super fun, and the posting has some great pics of the owner surfing it, too. Seller is asking $2,500, which is not cheap, but I have yet to see a bargain on a Skip Frye shape.

You can click on any of the photos above to enlarge. I have written up the Hobie Phil Edwards Model a few times, and it remains one of the most classic nose riders ever made. The board you see above was shaped by Phil Edwards, but it’s not a Hobie Phil Edwards Model. For starters, the seller claims the board was shaped in 1995. It also has some interesting details that make it very different from the classic 60s Hobie Phil Edwards Model, such as a triple stringer setup, a wider center stringer, and a different logo. At some point during the 80s or 90s, Hobie also reissued the Phil Edwards Model (with the help of Stewart Surfboards, I believe), that had an imitation foil logo on it, as well as a different outline from the board you see above. So then what exactly is the board above? I’m not sure — it may have even been a custom. The seller refers to it as a Classic Model, but I have never seen that mentioned anywhere. As always, if you have any clues, let me know!

Last but not least we have another creation from the mind of Tom Morey, who remains one of surfing’s foremost mad scientists. One of the coolest features found in the Morey-Pope McTavish Tracker model is the psychedelic graphic design of the Slipcheck patterns. The McTavish Tracker was designed by Australian shaper Bob McTavish, and it remains one of the standout shapes of the Transition Era. According to surfresearch.com.au, the Morey-Pope McTavish Tracker was created during a trip McTavish took to visit George Greenough in Santa Barbara, and the rest is history. I actually wrote up an earlier Morey Pope McTavish Tracker here. The earlier post features another example of the board and links to some resources with some history behind the groundbreaking shape.