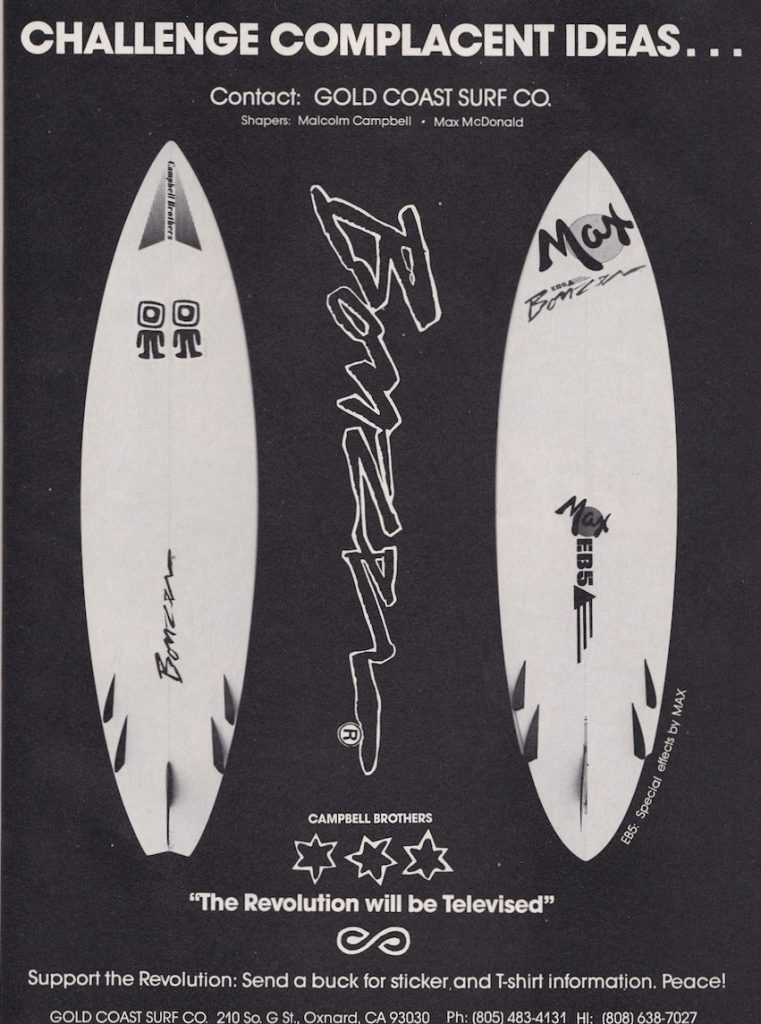 There’s something to be said about consistency, and the Campbell Brothers have been nothing if not steadfast in their belief about their groundbreaking design. It’s hard to refer to the Bonzer as an “alternative” design these days, given the fact the design counts surfers like Taylor Knox and brands like Channel Islands among its fans and collaborators. I’ve featured some vintage Bonzer ads before, such as this ad for the Bonzer produced under the Bing Surfboards label, and then another Campbell Brothers ad from the early Nineties. The brothers behind the design have also been very upfront about their progressive views over the years, resulting in the bold copy you see here. But you gotta love the fact the Campbells have never been afraid to challenge surfing orthodoxy.

The other interesting thing about the ad is the inclusion of Max McDonald. I was actually able to find out more about the board featured in the ad thanks to Surfy Surfy, whose excellent blog is always worth a visit. The EB5 featured here is a bit different from the one at the top of the page. Pic via Surfy Surfy

Surfy Surfy ran the photo above in a blog post, which you can find here. The photo you see above ran in Breakout Magazine in 1989, the same year as the ad found at the top of the page. The EB5 board that is featured in both advertisements is a collaboration between Max McDonald and the Campbell Brothers. (EB5 stands for Elevated wing Bonzer 5.) The Campbells started experimenting with five fin Bonzer surfboards in 1983. By the late Eighties they were working alongside McDonald, combining the fin setup from the five fin Bonzers with McDonald’s elevated wing design. McDonald began working on the wing design in the mid Seventies, after seeing Dick Brewer and Sam Hawk’s experiments with the design. All of this info is contained in the article that Surfy Surfy reproduced on their great blog. Max McDonald’s elevated wing design has its roots in Dick Brewer and Sam Hawk’s shapes of the Seventies. It’s purely functional, but I happen to think it looks absolutely gorgeous, too. Photo via the Campbell Brothers Bonzer 5 site

Thanks for reading and visit again next Thursday evening for more vintage surf ads as part of the Sagas of Shred series!