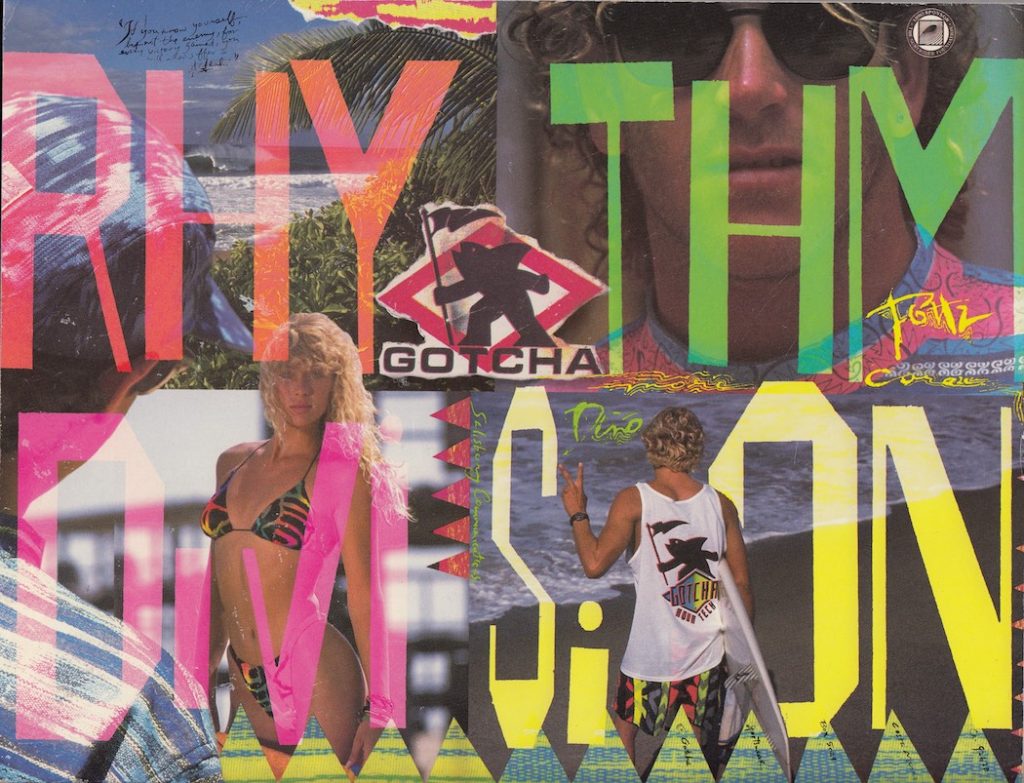 Before “More Core”, Gotcha was apparently focused on keeping the beat. Sagas of Shred has featured some Gotcha ads before, including this classic, and for good reason. I still think Gotcha’s contributions to surf culture are criminally overlooked. (On a related note, here’s an incredible Stussy thruster that belonged to Gotcha founder Michael Tomson.) Sadly, the brand didn’t stick around much further past the Nineties, although even in its waning days it still counted Rob Machado and Andy Irons (through the More Core Division label) among its flag bearers. A lot about this Gotcha ad feels thirty years old — unless I’m mistaken and abstract neon bikinis are back in style — but the distinctive energy and creativity is palpable. I don’t mean to kick the surf industry when it’s down, but you compare this Gotcha ad to the recent and rather lifeless offerings from Billabong, Quiksilver et al, and the difference is stunning.

Gotcha also had the benefit of counting Martin “Pottz” Potter as its marquee rider. This ad was published in the May 1990 issue of Surfer Magazine, shortly after Potter captured the world championship. Pottz’s brand of raw aggression was a perfect match for Gotcha’s rebellious aesthetic, and I think it’s one of the great athlete / sponsor pairings in the recent history of the sport, joining partnerships like Slater and Quiksilver, Occy and Billabong, etc.

What can I say? This ad is so awesome. The photos, the clothes, the typeface…everything is perfect. Oh, and lest I forget, shout out to Dino Andino, father of Kolohe, who was also a staple throughout some of the better Gotcha marketing during the Eighties and early Nineties.

At some point Gotcha’s website had a vault featuring its old ad campaigns, but sadly it doesn’t look to be functional right now. This is a shame and I hope it gets restored, as there are a ton of gems in there.

Thanks for reading and visit next Thursday evening for more vintage surf ads, courtesy of Sagas of Shred!