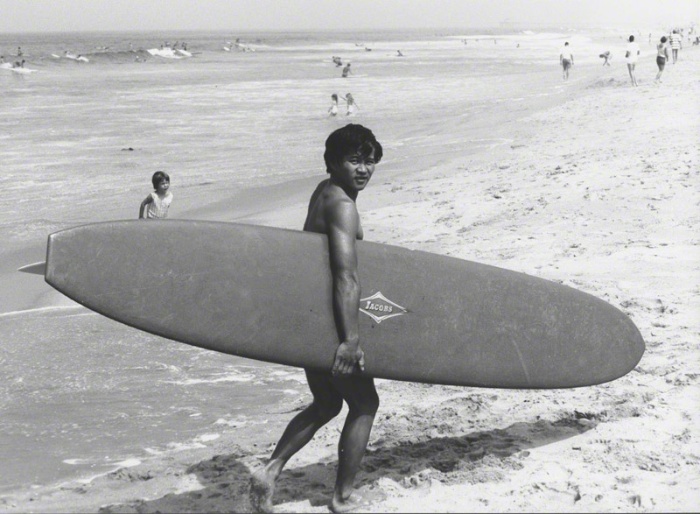 Greetings, Shredderz! Today is a special edition of the Weekend Grab Bag, a series that spotlights notable vintage boards currently listed for sale. This Sunday we have not one but two examples of the Jacobs Donald Takayama Model that are currently up for grabs.

A lot of the content on Shred Sledz veers towards the Seventies and Eighties. Nonetheless I think there’s a timeless aspect to the beautiful longboards shaped in the Sixties before the Transition Era. And given Takayama’s long career, whether it was as a pro in his teens, or the functional noseriders he shaped up until his passing, I think there’s something special about Takayama’s longboards.

The first board is an all-original 9’8″ Jacobs Donald Takayama Model. Pics are via the Vintage Surfboard Collectors group on Facebook, and are reprinted here with the permission of the board’s owner. This board is for sale, so please check out the post and DM the seller if you’re interested. Thanks Dave for allowing me to run your pics. According to the listing, the Jacobs Donald Takayama Model is all original, without any delam or twists or any other major issues. You can see that it has some snackles and repairs from over the years, but overall, it’s in good shape for a surfboard that pre-dates the Moon Landing. The seller is asking $1,800 and the board is located on Oahu, so keep that in mind for any potential shipping costs. Nothing makes me happier than seeing a board listed for sale with great pics accompanying it, and the seller definitely delivered in this regard. Check out the photos above for some more shots of the beautiful (and original) red fin.

The second Jacobs Donald Takayama Model is up for sale on Craigslist in Los Angeles. You can click the photos above to enlarge. As you can see, the board is very similar to the first one I posted, although it has green colored panels towards the rails.

You can click the photos above to enlarge. The green Jacobs Donald Takayama Model is in worse shape than the earlier board. The green version has some water damage towards the nose, which is clearly depicted in the photos. Here’s another shout out to the seller for providing some great and informative pics of the surfboard. You’ll notice the matching red fins on both boards. I can’t quite tell if the fin silhouette is the exact same.

The Craigslist LA Takayama board is being listed for $550. This is a good deal cheaper than the other board, a good chunk of the price difference can be chalked up to the significant difference in condition. I don’t have any recent price comparisons for the Jacobs Donald Takayama Model, so make of these prices what you will.

Dave, the seller of the board at the top of the page, helpfully included some old ads and descriptions of the Jacobs Donald Takayama Model. Make sure you click the photos below to enlarge them.

According to the ad, Takayama apparently shaped many of his Jacobs signature models himself. This is cool no matter what, but it’s even more impressive when you consider that in 1965, when the board was introduced, Takayama was only twenty two! The photo above and to the right also goes into detail about the actual shape of the Jacobs Donald Takayama model:

Designer: Donald Takayama — 1965 — for waves up to 15′ in height. Cost: 9’6″ $155.00. Leading Rider: Donald Takayama / Denny Tompkins. Design Theory: This board has a speed shape for the fast beach break and point waves. Thin rails are used for edge control and going through white water. Also, loss of speed will not occur while going under sections of waves. The nose is shaped and very thin with a little round belly in the bottom for maneuvering while riding on the tip of the nose. The tail is also quite thin and six inches in width. The roundness is also used on the bottom in the tail to provide a faster and smoother turn without spinning out in a critical wave. A conservative amount of rocker is put in the board with a small lift or kick in the nose. This enables the board to perform to the fullest extent for this type of shape.

These are two beautiful vintage surfboards, and if you know more about the Jacobs Donald Takayama Model, or you have one to share, feel free to drop me a line!

Photo at the top of the page by LeRoy Grannis; via the Encyclopedia of Surfing