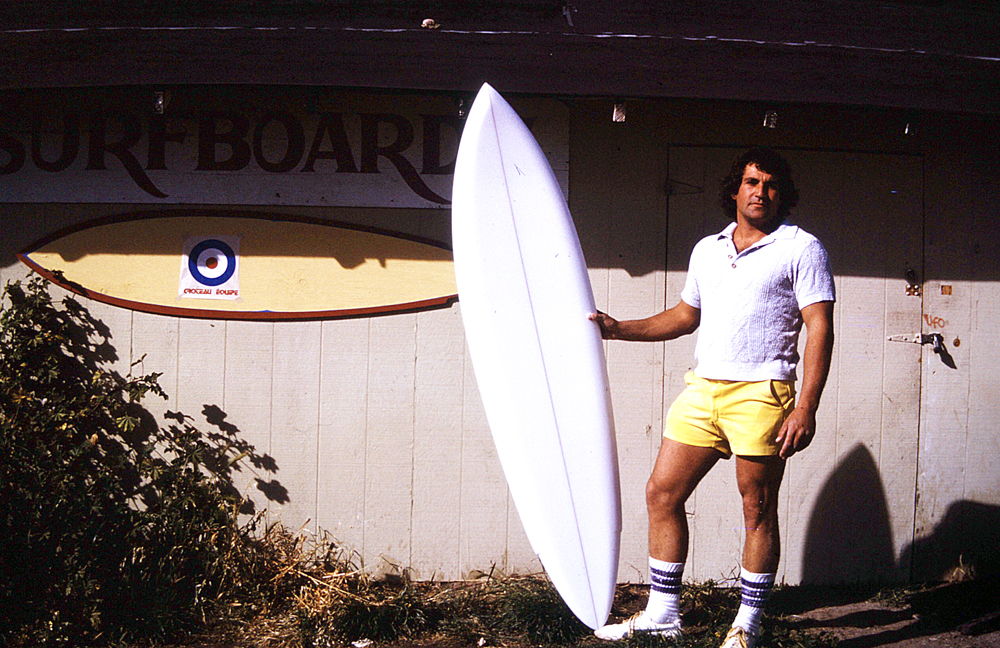 Greetings, Shredderz! By now, most of us are familiar with the biggest names in surfboard shaping: Dick Brewer, Gerry Lopez, Al Merrick…the list is long and illustrious. You can’t ever go wrong with the classics. But there’s something to be said about those shapers who might not match the star power of the aforementioned names, but, if you pay attention, seem to get mentioned by all the right people. Mike Croteau is one of those shapers. Croteau doesn’t have the immediate brand recognition as the earlier folks, but he gets praise from a diverse cast of heavy hitters in the world of surfboard shaping. Rusty Preisendorfer has mentioned Mike Croteau as an influence, and Croteau provided surfboards for top pros like Shaun Tomson and Occy. Croteau was well known in Santa Cruz, Hawaii and La Jolla before his passing almost exactly a decade ago. You don’t see a ton of Mike Croteau surfboards floating around, and even fewer of them that he shaped for the Hawaii-based Straight Up Surfboards label. Recently, however, a rad Mike Croteau / Straight Up Surfboards example popped up on eBay.

Croteau — I’ve also seen his name written as Mike Zeh-Croteau — must have shaped for Straight Up Surfboards during his time in Hawaii. Straight Up boards could be found under Occy’s feet during the late Eighties and early Nineties.

The board I’m writing about today doesn’t have any ties to Occy (who remains the Shred Sledz’s unofficial all-time favorite surfer.) Nonetheless, it’s a very clean example of an Eighties Mike Croteau surfboard, featuring some of his signature channels on the bottom. The board was originally listed for sale on eBay. You can find the original listing here, although the board is no longer for sale. All the photos below are via the eBay post.

The Mike Croteau Straight Up board you see above measures in at 7’2″. As you can see, it has a thruster fin setup, and the fins have been glassed on. It has an interesting baby swallow tail design. It goes without saying that the neon green spray job is 100% Shred Sledz approved. That said, the real draw of this board is in the intricate channel bottoms, as seen above. The Mike Croteau surfboard features six beautifully crafted channels towards the tail. Amazingly, the glass on fins and the swallow tail are all in great shape. It seems as if the board was hardly ever surfed in the three decades that have passed since it was shaped.

The board was undoubtedly created for some hefty North Shore juice.

Sadly, there aren’t many more details to be shared about the board, or Croteau’s shaping career. I’ve mostly seen Mike Croteau boards produced under his own label, which features a signature red white and blue bullseye logo. Nonetheless, I figured this was a great opportunity to showcase the work of Mr Croteau, a talented shaper whose work has remained a bit under the radar, even after his untimely passing.

Photo at the top of the page via Santa Cruz Waves