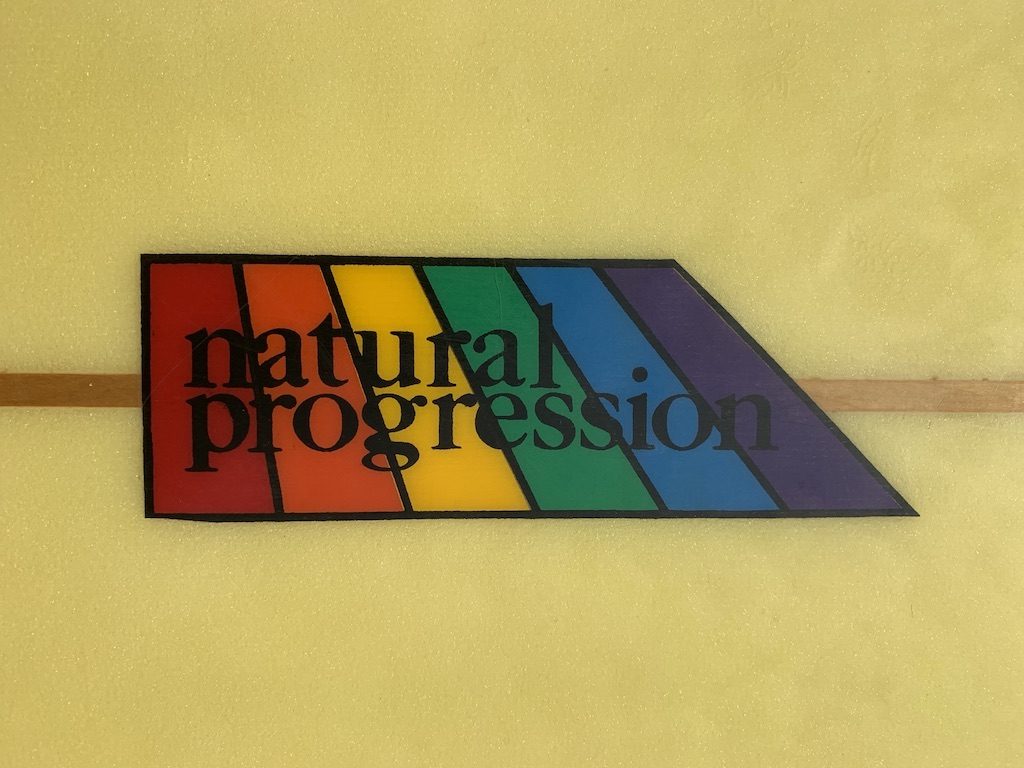 Greetings, Shredderz! Today we’ve got a real treat for you: that’s right, a Seventies Natural Progression single fin shaped by Robbie Dick. Natural Progression was a Los Angeles based label that enjoyed a brief but memorable time in the sun. This bad boy was lurking on Craigslist recently and a friend was lucky enough to snag it. Alright, that’s enough back story: onto the pics!

As you can see, the board is in pretty good condition. There are some dings and scrapes that aren’t super easy to see from the photos. Overall, though, the board is in great shape. The Natural Progression single fin measures in at approximately 7′ x 19″. The wide point is pretty far forward, as is common with boards made during this time. Overall it has a clean and gorgeous outline that you would expect from a Seventies single fin.

This post wouldn’t be complete without a mention of the awesome Natural Progression logo. Of all the defunct surfboard brands out there, this logo just might be best of the lot. (I’ve probably said that about some other surfboard label, too, so please forgive me if that’s the case.) Something about the logo — maybe the fact it’s colorful without being noisy — captures what I imagine California must have felt like in the freewheeling Seventies.

The board has a gorgeous black and white glass on fin, too, which is always a welcome touch. Again, I’m a bit surprised at how the fin has remained in great shape over the years, as these often get dinged up or knocked loose. I’ve seen the board in person and I can only guess that it wasn’t surfed very frequently, and then stored well for a number of years.

As you can see in the photo above, the signature has faded over time, but it’s still easy to make out some elements. The number, “77-193” (could be “77-793”, but I’m not sure), almost certainly signifies the fact the board was shaped in 1977. The number behind the dash is likely the sequential number for the number of boards shaped in that year. In fact, there’s actually another Natural Progression surfboard for sale on Craigslist right now, which you can find here. The numbering on the the board for sale reads “79-22”, which likely means it was the 22nd board shaped by Robbie Dick in 1979. You can also make out the “R. Dick” on the stringer above, meaning the board was shaped by Robbie Dick.

There isn’t a ton of information on Natural Progression and/or Robbie Dick online, but I was able to find a couple of interesting scraps here and there. First, it looks like Dick has since relocated to the Pacific Northwest, where he continues to shape boards. You can check out his website here. Second, the excellent Los Angeles nostalgia-themed website Westside Historic has some great pics of some Natural Progression memorabilia, which I have reproduced above. Finally, the International Surfboard Builders Hall of Fame has a cool page on Robbie Dick, which is where I nabbed the photo of Dick in the shaping room (top left).