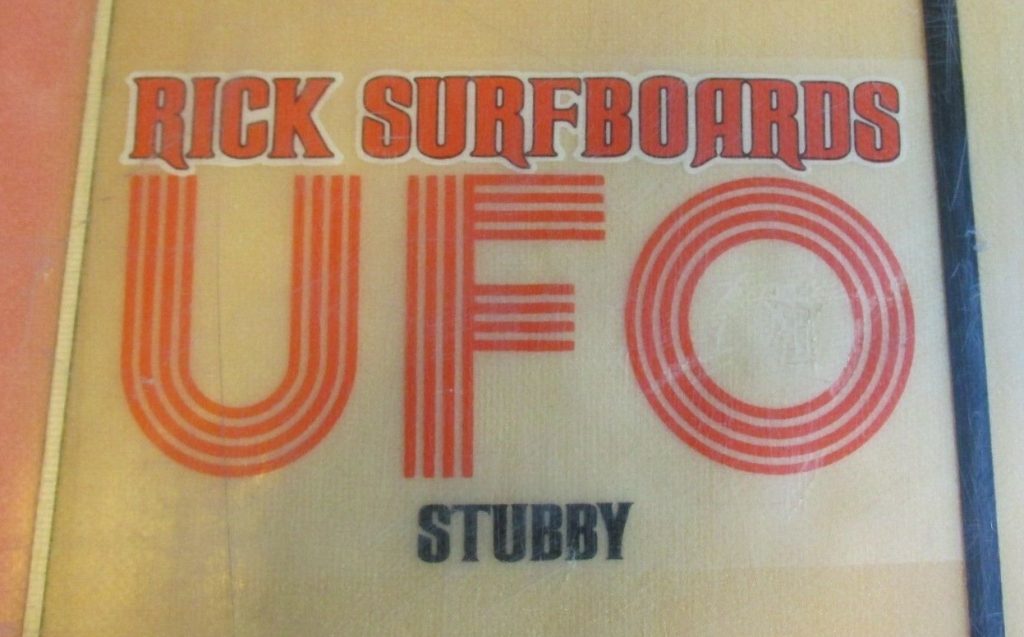 Greetings, Shredderz! Yes, I’m aware that it is no longer the weekend. I’m not going to let something as trivial as reality get in the way of delivering another dose of some vintage surfboard goodness, however. Keep reading for a selection of boards that are currently listed for sale, including a neat Rick Surfboards UFO Stubby model. More sledz below… Long time readers of the blog may know that I really, really love Rick Surfboards. See here for a Deep Dive I wrote on the label; and here’s another article on the Rick Surfboards Barry Kanaiaupuni Model. The Rick Surfboards UFO Stubby model pictured above needs work, but I still want to highlight what is a pretty unusual Transition Era shape from the label. It comes with what looks to be an original fin, and I dig the matching red high density foam wedge stringer. I was really stoked to find a Gordon & Smith Waterskate for sale. First, the board was designed by Tom Morey, who is one of the greatest inventors in the history of surfing. I actually learned about the origins of the G&S Waterskate a few weeks ago, when I visited Marc Andreini in his shaping room and showed him an old board of his. The vintage Andreini you see below was actually inspired by the Gordon & Smith Waterskate, particularly with its concave deck. The pics of the Waterskate from the Craigslist post don’t show off the deck very well, but it was cool to run into an example of this board so soon after learning about its origins.

Here’s a photo of Marc Andreini with a single fin he shaped in either 1970 or 1971. The board has an unusual concave deck along with some pretty boxy down rails. According to Marc, this is actually a take on a Tom Morey design, which was also produced as the Gordon & Smith Waterskate. I forget the exact mechanics but apparently the design principles create a similar effect to Marc’s current Greenough-inspired edge boards. Marc tells me he shaped similar boards for Santa Barbara surfers who were exploring El Salvador’s right hand point breaks during that era. If you look closely at the board you’ll notice it has the original Andreini Surfboards logo, which I think is such a cool touch. And if you look even closer, you’ll notice a Clark Foam blank in the background, too ???. Anyway it was great to show Marc the board and get the history behind the shape. For all the time I spend looking at boards on Craigslist, nothing beats the experience of talking to and learning from a knowledgeable shaper in person! #marcandreini #andreinisurfboards The board you see above isn’t really vintage, per se, but it still represents a cool collaboration between a few well regarded shapers. Rich Pavel is known for his fish designs, and one of his most recognizable models is the Quan or the Speed Dialer, which is a quad fin fish. Terry Martin was an early mentor to Pavel, and according to the Craigslist ad, after seeing the Speed Dialer, Martin decided to whip up one of his own. The board is priced at an exceedingly reasonable $375. I absolutely love Dick Brewer Seventies Single Fin surfboards, and this one is no exception. One caveat: the board has been fully restored, hence the flawless exterior. What I love about this board, other than the classic outline, is the unusual Brewer Boards logo. I can’t say whether or not it was shaped by Brewer himself, but there’s no denying that it looks stunning.