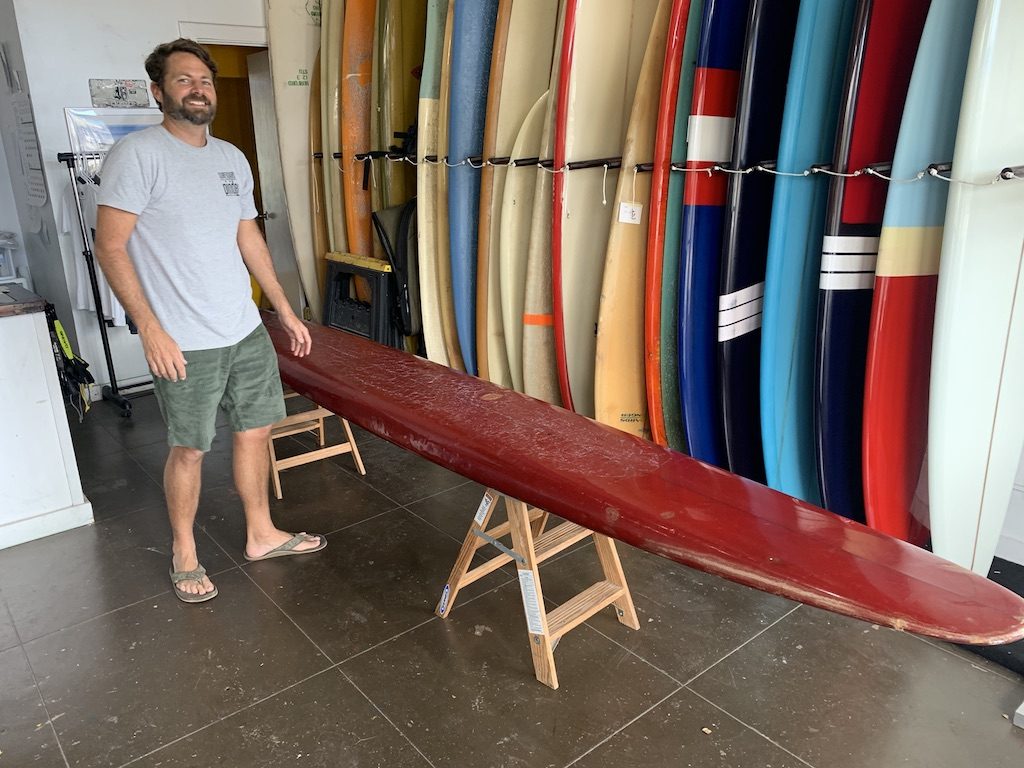 Greetings, Shredderz! I’d like to welcome all of you to a brand spanking new series on the blog, titled “Shaper Spotlight.” Up until now, this humble blog has focused mostly on vintage surfboards. I think it’s also important to profile contemporary shapers who are building boards today. There’s a ton of rich history found in older surfboards, and that will always be a big part of Shred Sledz. That said, there’s only one way to ensure hand shaped surfboards continue to get their due, and that’s by supporting the talented craftsmen who build them.

Last month I took my first ever trip to Oahu, and during that time I was lucky enough to meet up with Todd Pinder, the man behind Surfboards by Todd Pinder. Pinder plies his trade in Honolulu, where he painstakingly crafts each and every board by hand. This doesn’t just apply to shaping, however — Pinder is one of those rare shapers who also glasses all of his own creations, too. Todd Pinder creates all his boards by hand, shaping and glassing his creations. Here are a few boards waiting to be finished. Love the bold but simple red color.

Pinder might be a modern surfboard builder, but he draws upon some very deep roots from years of living in Hawaii and working alongside some well respected folks, like Carl Schaper (pronounced Shopper) and Donald Takayama. Pinder also continues to provide boards for folks like Joel Tudor and his sons.

Pinder’s shop is filled with a bunch of rad vintage sticks. See below for a neat Seventies Greg Liddle single fin. I can’t recall off the top of my head whether it was a hull, but I really dig the unusual pattern on the deck. Click the photos below to enlarge.

I got to see the Bing David Nuuhiwa Noseriding model that Joel Tudor posted about below. Todd told me the Nuuhiwa is a little shorter than other stock DN Noseriding models from the same time period.

The single coolest board Pinder showed me was an insane Joe Quigg paddleboard. Make sure you click the photos below to enlarge, as they show off the paddleboard in a bit more detail. Check out the squared off tail. The Joe Quigg paddleboard has incredibly thick rails, and I think it’s about 12′ long, so there’s plenty of paddle power to spare. You can see Pinder posing alongside this board in the post at the top of the page.

Here are some earlier photos, via Pinder’s Facebook page, that show Joe Quigg alongside Todd and the paddleboard.

That’s not all Pinder had stashed away, however. Upstairs in his shaping room Pinder also had a Seventies Surf Line Hawaii single fin shaped by Buddy Dumphy and a Gordon & Smith Skip Frye from the late Sixties. Click the photos below to enlarge. I couldn’t quite figure out which model the G&S / Skip Frye board is — maybe a “Speed Board”? — but it’s interesting that it has a small text G&S logo, instead of the classic bow tie logo that we all know and love. Pinder tells me the outline on the G&S / Skip Frye board has inspired some of his own egg shapes.

If you’re still not satisfied, well, there’s more. Pinder also showed off a sick Morey-Pope Sopwith Camel. The Sopwith Camel is one of Tom Morey’s many quirky and incredible Transition Era shapes, featuring an early stringerless design. I could go on a rant about how Tom Morey might be the most underrated inventor in surfing history, but I’ll save that for another time. And while Pinder’s shaping room is filled with vintage gems, I’m even more stoked about his current creations. I mentioned it earlier, but it’s worth repeating: Pinder shapes and glasses all of his boards. Yes, all of them. Surfboards are often marketed as bespoke goods, but the manufacturing reality can be the opposite. When you order a surfboard from Pinder, you know it was built by one set of very capable hands from start to finish. If you even have the slightest appreciation for craftsmanship, that should resonate with you. As a bonus, Todd is a very friendly and surf stoked individual. Pinder posing alongside some of his newer creations. Pic via Surfboards by Todd Pinder Facebook Page

If you’re in the market for a beautiful new board, hit up Surfboards by Todd Pinder and tell him we sent you! You can also follow him on Instagram here and on Facebook here. Thanks Todd for inviting me to your studio and for sharing the story behind some killer surfboards!