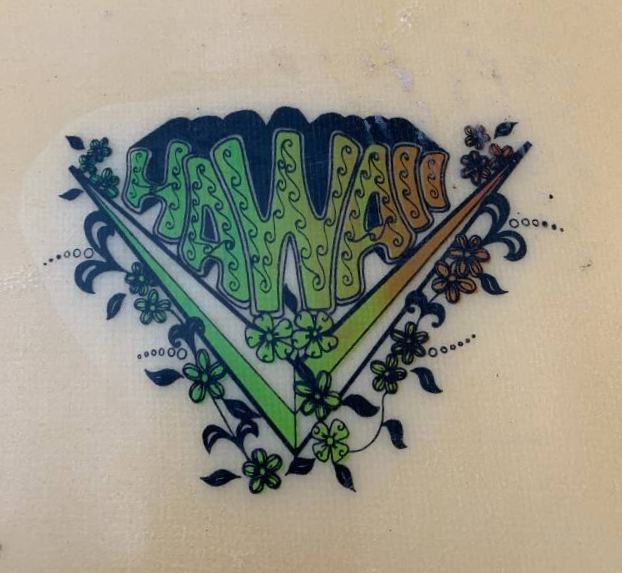 The Surfboards Hawaii V bottom you see above (click photos to enlarge) comes courtesy of Shred Sledz reader Bobby. Thanks for sharing the photos of your beautiful board! As you can see, Bobby’s Surfboards Hawaii V is in pretty great condition. The fin — I’ll be honest, I always mix up my Transition Era fins, and I always guess W.A.V.E. Set when it’s not, so I’ll just pass for now — in particular stands out, and you can see the dramatic vee in the tail. (Update: I just asked a far more knowledgeable friend, and he confirmed that the fin is an early Bahne / Fins Unlimited design.)

I’ve heard some people say that the Surfboards Hawaii V doesn’t surf all that well, but I’m not one to judge. Rather, I tend to appreciate the unusual lines and dimensions of the board. I always trip out whenever I see a close up shot of the tail of a Surfboards Hawaii V bottom, like in the photo below. I’m always struck by the sheer amount of foam packed in the back end of these boards. The Surfboards Hawaii V bottom is almost reminiscent of a Corvette with its bulky, high tail. In addition to the dramatic vee on the bottom, you can also see how the tail section on the deck has been carved out, too. I love the black pinline on Bobby’s board and how it accentuates the Hawaii V’s angular lines. There was another Surfboards Hawaii V bottom that was posted for sale on Craigslist earlier this month. I have reproduced some of those photos below, which give you a good idea of the rocker and outline of the board. You can click on the photos below to enlarge.

One thing I have never been able to track down is more information on who might have shaped the Surfboards Hawaii V bottoms. As many of us have been known to do, Bobby sought out the counsel of Bill Thrailkill on Swaylocks. According to Bobby, Thrailkill told him that there’s a good chance Ed Wright, who was on the Surfboards Hawaii label in the late Sixties, shaped a number of these boards. If anyone knows more, hit me up!

Last but not least, here’s a cool Surfboards Hawaii V bottom ad, courtesy of the @vintage_surf_ads account on Instagram. I love how the ad turns up its nose at the competing “mild V-bottoms on the market today”, and touts the fact that the Hawaii V is for “experienced surfers only.” It’s also interesting to read that these boards were apparently made with fiberglass stringers, too.

“Unlike the many mild V-bottoms on the market today, the Surfboards Hawaii V is radical… the Hawaii V is your key to creative discovery – one step beyond.” #surfboardshawaii #vbottom #transitional #transitionera

Thanks again to Bobby for sharing photos of his beautiful Surfboards Hawaii v bottom board, and I hope you enjoyed the post!