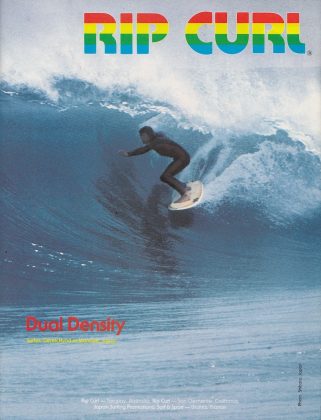 Greetings, Shredderz! It’s late and I gotta be up early tomorrow so I’ll make this one brief. Pictured above is a Rip Curl ad that appeared in the January 1981 issue of Surfer Magazine (Vol 22, No 1), featuring none other than Derek Hynd. It’s funny to see Hynd in an ad for a big surf brand, considering that his elusiveness has now become central to his reputation. Nonetheless, I can’t argue with any advertisement that features a surfer of Hynd’s stature getting slotted on a flawless wave.

Thanks for reading and tune in next Thursday night for another vintage surf ad as part of the Sagas of Shred series.