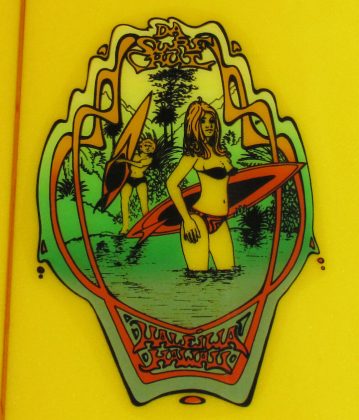 Yes, it’s true: here at Shred Sledz we love vintage surfboards. And while you can never go wrong with the classics, there’s something to be said about rare and unusual examples. Today’s blog post features a board made by a legendary shaper for a brand that is likely unfamiliar to most. Pictured here is a Mike Diffenderfer shaped Seventies single fin, which was produced under the Da Surf Hut label. I don’t even know if it’s correct to refer to Da Surf Hut as a label: the original eBay listing makes it seem as if Da Surf Hut was a shop in Haleiwa.

Any Diffenderfer shaped board is worth paying attention to, given Mike’s incredible resume. Diffenderfer came up with the name for Oahu’s infamous Pipeline, and was an incredibly accomplished shaper before his untimely passing in 2002. Diff’s boards are still prized among collectors, and to a certain generation of shapers, he is still widely acknowledged for his influence. In particular, Diffenderfer was known for shaping exquisite guns, as well as chambered balsa boards.

I am most familiar with Diffenderfer’s production under his own name, whether it was Diffenderfer Surfboards or Channin / Diffenderfer. However, if you dig around on the internet you’ll run into a few cool examples of boards Diffenderfer shaped under different labels. Inter-Island Surf Shop employed Diff as an in-house shaper in the Sixties, and I’ve seen Diff boards for both Lightning Bolt as well as Surfboards Hawaii. See below for an example of another interesting Diff board, courtesy of Buggs’ Instagram.

The board featured below is a 6’10” x 19″ x 3″ winged single fin that was just sold on eBay. All photos in this blog post are via the listing, which can be found here. The final sale price was $995, not including shipping. The Diffenderfer board is in all original condition, which is pretty amazing considering its age. As you can see, there are some absolutely killer details, including some beautiful pin line work and then an original wooden fin. You can click the photos below to enlarge.

Usually I would be leery of declaring the board a Diffenderfer shape without evidence of a signature. However, I believe this board was at least identified by Randy Rarick, and there aren’t many (if any!) people on the planet who are more knowledgeable when it comes to surfboards.

Thanks for reading and I hope you enjoyed this rare Mike Diffenderfer surfboard as much as I did!