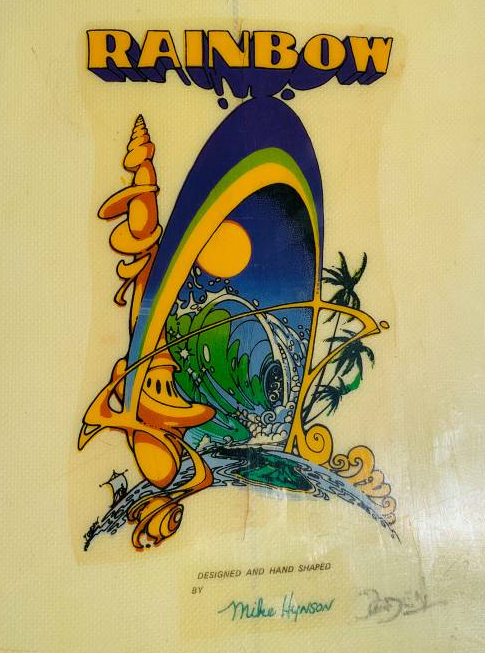 Greetings, Shredderz! Today we have a quick hit for your viewing pleasure: a Rainbow Surfboards Mike Hynson single fin that was recently listed for sale on Craigslist. The board you see here was originally posted early last month, but the listing has since been taking down. All the photos you see in this blog post are via the original Craigslist listing and the board does not belong to me.

As you can see, the main draw of the Rainbow Surfboards Mike Hynson board is the combination of the label, the shaper, and of course, the psychedelic airbrush spray on the bottom. Click the photos above to enlarge them.

According to the original listing, the Rainbow Surfboards Mike Hynson board you see above sports an early airbrush from Peter St Pierre. St Pierre still sprays boards today, out of the Moonlight / Christenson factory in San Diego. You can find St Pierre on Instagram here.

As you can see, there are some clear similarities between the two boards. The Craigslist board is in far worse condition, but it was listed for a way more modest $1,000 originally. There’s no saying what the final sale price was, but in general, auction boards tend to attract higher price tags, given that they’re usually carefully selected for condition and rarity.

Anyway, here are two rad examples of Rainbow Surfboards Mike Hynson sticks, and I hope you enjoy those insane airbrushes as much as I do!