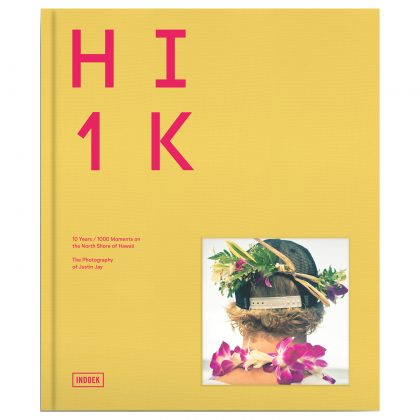 Greetings, Shredderz! Today we’ve got something a little bit different, but in my opinion, no less rad. Yes, Shred Sledz is (mostly) a blog about vintage surfboards and surf history. But more than anything else, we do our best to celebrate surf history, surf culture, and the people who make it all happen.

The last decade has been an eventful one for surf media. Print magazines, which for decades were critical in defining surf culture, have been largely pushed aside by the internet. And while I fear for the future of Surfer Magazine, I’m simultaneously encouraged by the rise of fantastic new media projects, many of which have been directly enabled by social media. One such project is the new book HI 1K, which features the photography of Justin Jay and was designed by the good folks at Indoek. HI 1K is running a pre-sale campaign on Kickstarter, which you can find here.

I could get on my soapbox and tell you how important it is to support independent media, blah blah blah, but really, you’re only doing yourself a favor if you back the Kickstarter campaign. HI 1K is a beautiful 244 page hardcover book that depicts a decade’s worth of portraits taken on Oahu’s infamous North Shore. The North Shore needs no introduction as surfing’s ultimate proving grounds, and Justin Jay has brought his talents to bear in documenting surfing’s most action packed stretch of sand over the past ten years. Moreover, HI 1K was designed by the same people responsible for bringing you the excellent Surf Shacks book, which remains one of my all time favorite surf-themed coffee table books. All in all, HI 1K promises to be an in-depth look at one of the more enduring and compelling subjects in surf culture. But don’t take my word for it — check out the photos in the post and the trailer you see below.

Last but certainly not least, you know we had to feature a photo involving a memorable surfboard. The picture you see below is a bit bittersweet, given Sunny Garcia’s ongoing health struggles, but it’s a beautiful tribute to one of Hawaii’s greatest surfers. The board is a 1982 Reno Abellira-shaped Lightning Bolt with a Team Bolt laminate.

Anyway, if you haven’t supported the project yet on Kickstarter, you can do so here. Frankly, it’s a bargain, as you get to buy the book below its retail price, and then sleep better knowing that you did your part to support a promising independent project. In addition, there’s a whole bunch of potential goodies and bonuses for those interested in putting a few more dollars to work. I’ve already plunked down my own hard earned cash and I can’t wait to get this thing later this fall. While you’re at it, check out Justin Jay and Indoek, as they are working on really rad projects that are definitely worth your time and support.