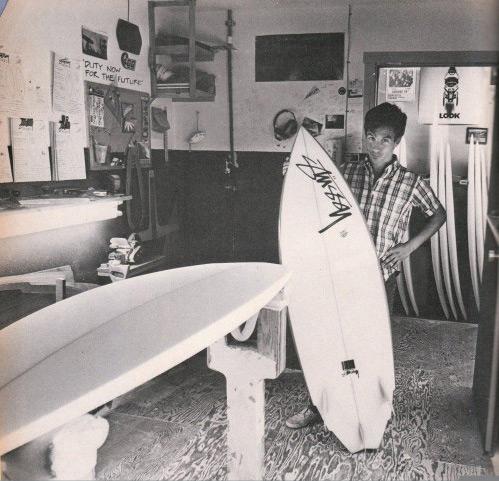 Pop quiz, hotshot: what has six fins, incredible artwork, and more color than a bag of Skittles? Well, that would be the three Shawn Stussy shaped twin fins you see pictured above. These are some truly top notch examples of Stussy’s infamous Eighties shapes. You can check out another Eighties Stussy twinny I wrote up here. I believe the one in the middle is an earlier board, judging by its logo. What I wouldn’t do for one of these bad boys!

Is there such a thing as too much Shawn Stussy? I don’t know, and I’m not the right person to ask. Bird of Bird’s Surf Shed (glad to see they got their Instagram back!) recently posted this absolutely gorgeous Stussy / Russell Surfboards gun. It’s not the only Stussy / Russell shape in Bird’s ridiculous quiver, either! If you see me with tears running down my cheeks and a far off look in my eyes, it probably means that I remembered the profound beauty of the matching leash loop and glass on fin and was overcome with emotion. Excuse me in advance.

I love how this shot elegantly illustrates surfboard progression over the years. The board on the far left is actually an early John Bradbury Creative Freedom shape from the late Sixties. It’s very cool to see the S decks on the Transition Era boards gradually flatten into more recognizable rockers. It’s also interesting to see the rare and coveted Yater Hawaii laminate on a thruster. I had always assumed that those appeared only on older boards, but the fin setup means it had to have been shaped in the Eighties at the earliest. I’m partial to the racy looking yellow board that’s second from right.

In theory Shred Sledz is a vintage surfboard blog, but we also reserve the right to feature any shapes, modern or otherwise. Tyler Warren shaped this heat seeking missile for Dane Gudauskas, and I’m dying to see where it gets surfed. Massive Cloudbreak, I hope? This board reminds me a bit of the neat HaydenShapes single fin that Craig Anderson recently took through its paces. The Gudauskas brothers are do gooders in and out of the water, the latter via their Positive Warriors Foundation.

Photo at the top via Natterjacks; photographer unknown (let me know if you have any clues!)