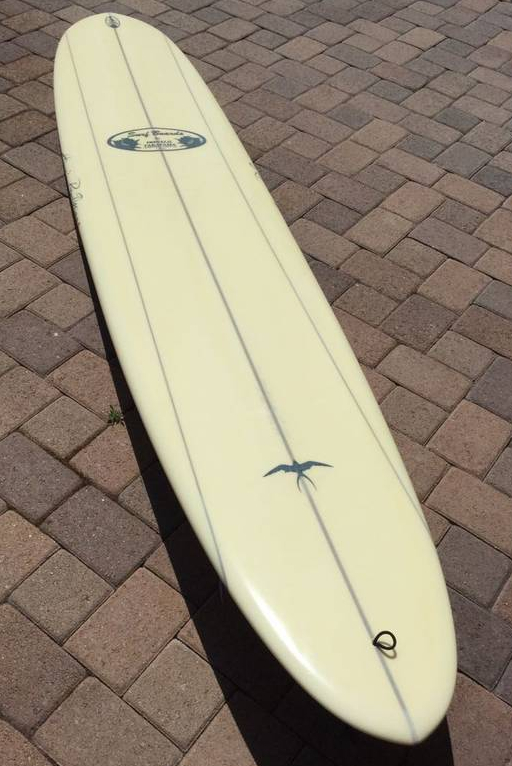 Greetings, Shredderz! I’ve been seeing a lot of neat boards pop up for sale, so I decided to write up one of my recent favorites. Pictured here is a 1994 Hawaiian Pro Designs Donald Takayama DT-2 model. According to the seller, the board was ordered directly from Donald and shaped by Takayama. The DT-2 model, which is described as “Donald’s ‘all-rounder'”, continues to serve as a staple of the Surfboards by Donald Takayama lineup.

The Donald Takayama DT-2 Model featured here measures in at 9’6″ x 22 1/2″ x 3 1/16″. The board was listed for sale on Craigslist in San Diego earlier this weekend, but by the time the post went live, the listing had been taken down. All photos here are via the original listing.

This is a nice, clean example of Takayama’s DT-2 Model. I really dig the blue glass on side bites and the muted cover palette. The board has all the lamiantes you’d expect from a mid-Nineties Hawaiian Pro Designs Donald Takayama stick: the script down the rails, the oval logo on the bottom, and the signature bird design.

According to the seller, there were some dings that were professionally repaired, but I can’t tell where these are. Overall, the board looks to be in very good shape.

The DT-2 model pictured in this post has an interesting signature on the stringer. It’s extremely hard to make out, and I did my best to tweak the pic a bit to bring out the text. According to the listing, the line above the stringer reads “From Dad, September 4th 1994”, and the line below lists the serial number (which is illegible) and the dimensions. The vast majority of Donald Takayama boards from this era have clear signatures on the stringer, like this example. However, the DT-2 does not. The handwriting looks very similar to Donald’s, based on the other boards I have seen. I also think it’s extremely unlikely the seller whipped up a crazy story to lie about the provenance of the board. Moreover, all the details on the board support the seller’s explanation that it was hand shaped in 1994, from the era-specific logos to the custom inscription on the stringer. I feel very confident in saying this is a Donald Takayama hand shape, and I thought the unusual inscription was worth a closer look for those who like to geek out on small details.

The seller listed the board for $745. I think this was a great price, and I’m not surprised to see that the listing was quickly taken down. I’m no fortune teller, but given Takayama’s incredible career, I wouldn’t be surprised to see his hand shaped boards continue to rise in value.