Weekend Grab Bag: All Mixed Up 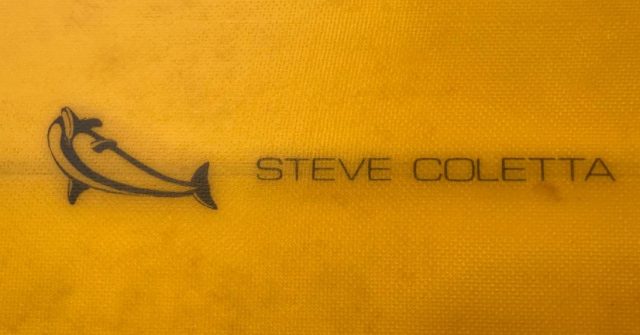 Greetings, Shredderz! This Sunday we’ve got a smattering of sledz for your perusing pleasure, as part of our Weekend Grab Bag series. It’s been a while since we last ran one of these entries. The last time around we featured some cool Donald Takayama surfboards. The rules for the Weekend Grab Bag are simple: scroll below for some photos of surfboards that are currently listed for sale online, along with links to the sale listings and some commentary. Without any further ado, let’s take a peek at the goods!

This is a gorgeous vintage board shaped by Steve Coletta of Natural Curves Surfboards. Coletta is a longtime Santa Cruz shaper. As someone who occasionally samples the right hand points of Santa Cruz, I have a fondness for vintage boards from the area: here’s a stunning Rick Noe / Steamer Lane Surfboards single fin, and I’ve always got my eye peeled for any Chuck Vinson shapes. Anyway, the Steve Coletta stick pictured above is 7’7″ of Seventies single fin goodness with some killer details. Check out the technicolor tail block and the gorgeous glass on wooden fin. The seller is asking $380. I think this is an attractive price, but as always, that’s up to the market and not me.

This Shaun Tomson Model can be found tucked away on California’s Central Coast. The board isn’t in spectacular condition, and I think it might be a tad pricey considering the condition (asking price is $300), but I really dig this thing. Tomson, of course, is one of the greatest surfers of the Seventies, if not all time, and I love the swooping airbrush. This board has a nice glass on fin, too.

Here at Shred Sledz we’ve featured a ton of Donald Takayama’s boards. Unsurprisingly, most are longboards, with some other templates mixed in here and there. However, you don’t really see a ton of straight up Takayama thrusters out there. This board has some clear Eighties influence with the wide point pushed pretty far back, and the short-lived 2+1 fin setup. I’m curious about where the price will end up. The board is $147.50 as of the time of this blog post, with three and a half days still left in the auction.