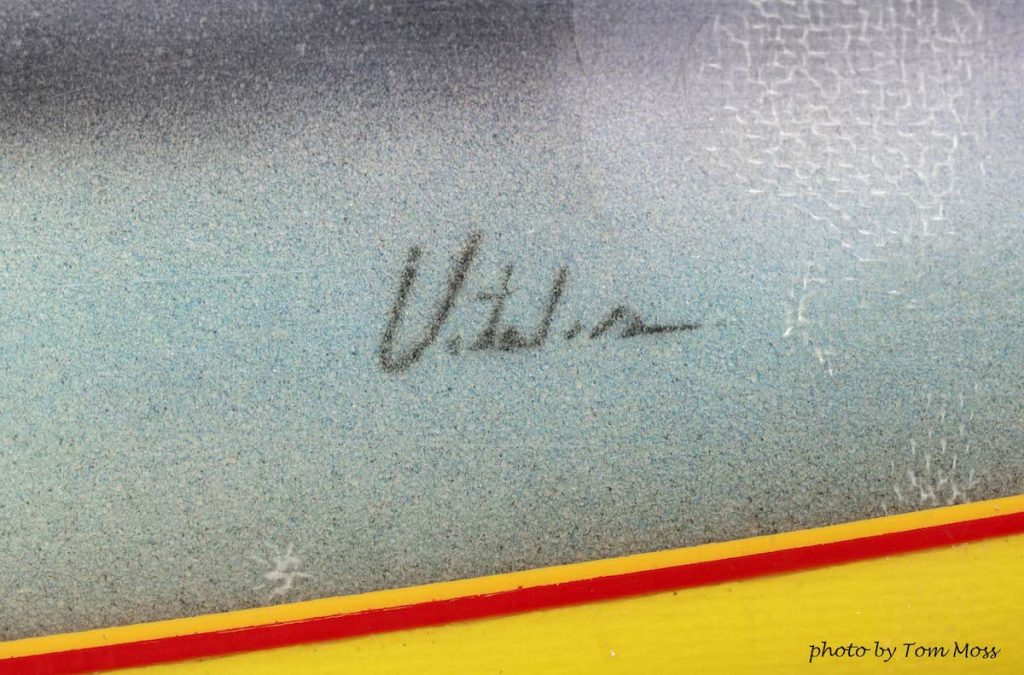 Greetings, Shredderz! I think we can all agree that one of life’s great pleasures is the feeling that comes along with finally getting to the bottom of a particularly frustrating mystery. Some of you may remember an Eaton-shaped Bing Bonzer I recently wrote up featuring a stunning airbrush by a mystery artist. Well, it turns out the artist responsible for the airbrush is a gentleman named Glenn Vitalis. In addition, a reader sent me another killer example of a Vitalis airbrush, this time on a rad vintage G&S stick. I ended up sharing the G&S / Vitalis board to Instagram, which you can see below.

Today’s board is another Eaton-shaped Bing Bonzer, and the photos you see here come courtesy of Bing collector Tom Moss. Tom graciously gave me permission to use the photos of his absolutely killer board. Tom is an admin of the excellent Classic Bing Surfboards group on Facebook, where he also shared some pics of his Bing Bonzer. And, if like me, you prefer to see (and ride!) surfboards in person, Tom is putting some of his personal boards up for display in the new Bing 60th Anniversary exhibit at the Surfing Heritage and Cultural Center. Tom claims the board below was shaped in 1978. Click the photos below to enlarge.

How sweet is that airbrush? The more I see of Glenn Vitalis’ work, the more I dig it. It’s interesting that the airbrush covers the deck of the board and not the bottom, as you might expect. Moss tells me that Vitalis later went on to do numerous covers for “Field and Stream” magazine. Sadly, I was unable to find any of Vitalis’ work online. Don’t miss out on the subtle red resin pin line, either.

And yes, the tail has the exaggerated concave and branded side bites (or runners, in Campbell Brothers parlance), just as you would expect from any vintage Bing Bonzer worth its salt. Tom has what looks like an original small Eaton fin installed as well.

Thanks Tom for sharing photos of your rad Eaton-shaped Bing Bonzer, and for sharing another fantastic example of Glenn Vitalis’ beautiful airbrush art!

Note: the article was updated on July 26 with a few corrections. The board is a Mike Eaton-shaped Bing Bonzer, not an Eaton Bonzer. Tom Moss is an admin of the Classic Bing Surfboards group on Facebook, and I also added some color around the fact that the Campbell Brothers refer to the side bite fins as runners. Thanks Tom for your help!