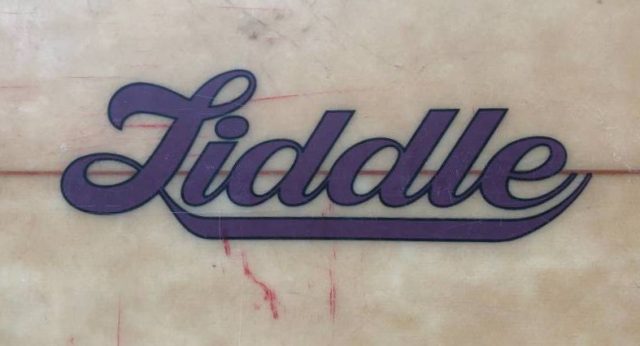 Greetings, Shredderz! Today we’ll be talking surfboards and cold, hard cash. Yes, I know: some people out there hate the financial aspect of surfboard collecting. (If you have any tips on how it can be done for free, well, I’m all ears.) But more than anything else, I think it’s helpful to give people an idea of what prices to expect for certain collectible boards. Today we have not one but two vintage Greg Liddle boards, both of which are still for sale. Without any further ado, here’s an overview of the sticks and some thoughts around what the sellers are asking.

Two things alert me to the fact this is an older Liddle surfboard: first, the purple logo seems to have been mostly used for older shapes; and second, the logo looks oversized as well. That said, it’s really hard for me to say when Greg’s boards were shaped. I tend to think this one was shaped during the Seventies or the Eighties due to the laminate, but I’m not 100% sure.

I can’t believe I’m going to type this, but I don’t think the price is completely insane. That said, the fact the listing is still up makes me wonder if it’s not priced a tad on the high side, as vintage Liddles tend to vanish whenever they pop up on Craigslist. The more I look at this board the more I think it’s likely it’s not a hull (thanks to Jesse for confirming), which would explain why it hasn’t been sold. Compare the purple laminate board above to this vintage Liddle gun that I wrote up earlier — you’ll notice some similarities between the two.

Finally, here’s a photo of another vintage Liddle board with a purple laminate, courtesy of artist / hull aficionado Alan Casagrande.

Whenever possible, I prefer all-original surfboards, even if it means making some compromises on the cosmetic front. But in the case of the Seventies Liddle single fin you see above, I think a full on glass off restoration job is likely the best route. Given the board above will likely have to be fully restored, I think the $300 price tag is ambitious. It’d be one thing if the board were a classic hull design, but it’s a more unusual (and traditional) Seventies downrail single fin. Don’t get me wrong, I dig that it’s a little different, but at the end of the day, most collectors want to see the classics, which in Liddle’s case mean his displacement hulls. I hope someone snags this board and does it justice, as it is a very cool design.