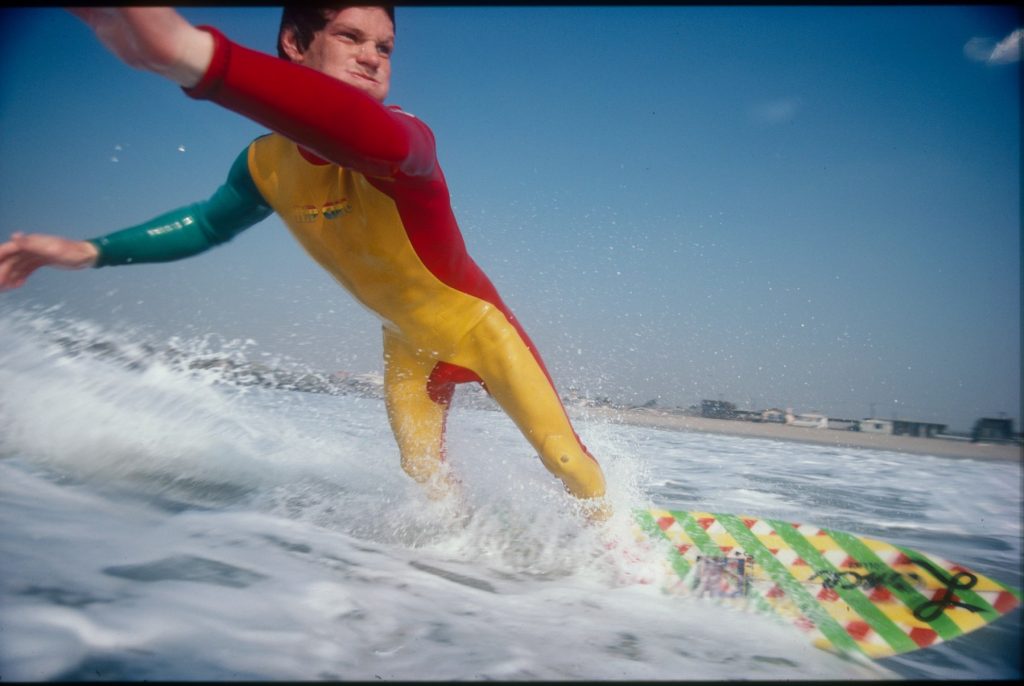 Shredderz, I can’t lie: it has been some time since I last offered up an entry of our Weekend Grab Bag series. But better late than never, right? Today we’ve got an eclectic group of vintage surfboards. Per Grab Bag rules, all boards must be currently listed for sale as of the time the post is published. Keep scrolling for more, starting with a sweet Wave Tools Jeff Parker Model.

You want logos? We’ve got you covered. Pictured above is an Echo Beach era Wave Tools thruster. To exactly no one’s surprise, the board is practically drowning in awesome, oversized laminates — how sick are the ones on the rails? — and a loud herringbone pattern paint job. Parker’s Jack of Spades personal logo is all time. I’m also intrigued by the outline. The pronounced wings make it look like a more aggressive predecessor to the bump squash tail thrusters that were popular in the Eighties. If I’m not mistaken, the board is only 5’2″, but that hasn’t put a damper on the bidding. As of the time the post was written, the board was already at $640, despite needing a decent amount of work. The photo at the top of the page features Parker on a different but similarly colorful Lance Collins design; photo is by Mike Moir.

I’ve long had a fascination with the stings Rick Hamon shaped under the SNI / Aipa label. The one you see above is a nice and clean example. I think the price is quite high, but hey, it’s a lovely board and the seller provided some great pics, too. The seller dates the board to 1974 and the board is 7’4″. Love the airbrush colors and the pin line.

Last but not least we have a very cool G&S Midget Farrelly Stringerless Model in mostly original condition. Like the SNI / Aipa sting above, I think the price is on the high side, but it’s a very cool older board. I hesitate to even link to this older post I wrote, but it contains some decent info on the Farrelly’s various collaborations with Gordon & Smith. The board is 9’10”, and according to the seller it was likely shaped in either 1966 or 1967. I am guessing the G&S Midget Farrelly Stringerless Model was shaped right before the Transition Era took off. The seller believes it was likely shaped by either Mike Eaton or Skip Frye. Those are interesting theories for sure, but I don’t know enough about G&S history to weigh in one way or another.