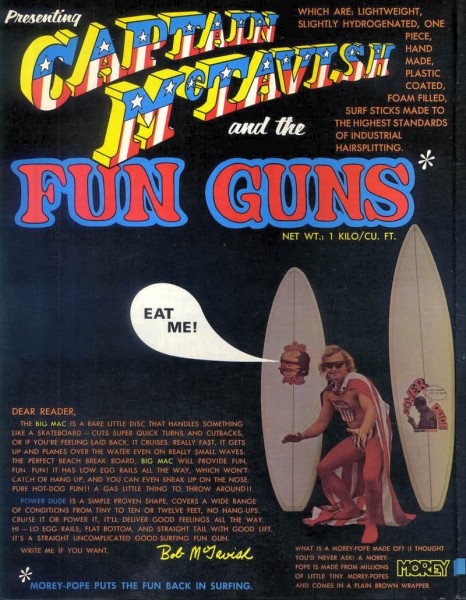 Greetings, Shredderz! My summer vacation is finally coming to a close. Beginning next Thursday Sagas of Shred will pick up where it left off, featuring vintage surf ads scanned from my collection of vintage magazines. (Side bar: I’m still looking for Surfer Magazine issues from the Sixties and Seventies, so get in touch if you’re in California and you have some up for grabs!) In the meantime the Sagas of Shred series is featuring some rad vintage surf ads that I have found elsewhere on the internet. Today we have a ridiculous spread courtesy of Morey-Pope Surfboards, coming on the heels of my writeup of a cool Morey-Pope Sopwith Camel that was recently listed for sale. Even better, the ad originally appeared on the peerless surfresearch.com.au. Seriously — please check out surfresearch.com.au. It is nothing short of a digital surf history museum. Don’t let the site’s distinct Web 1.0 vibe scare you off. It is an absolute treasure trove, filled with gems like the Morey-Pope ad pictured above.

The ad is actually a two page spread that ran in a 1970 issue of Surfer Magazine. I have included both photos above, which you can click to enlarge. There is a lot going on. You could even argue it’s too much, but to me, it’s a perfect expression of the limitless creativity that fueled Tom Morey’s career.

As a bonus, check out another Morey-Pope ad I found on Instagram below. I love the super colorful slipcheck designs on these MP boards.

Thanks for reading and we hope to see you next Thursday evening for more Sagas of Shred!